Short Stories: The Society of Flower-Pluckers by Gargi Mehra 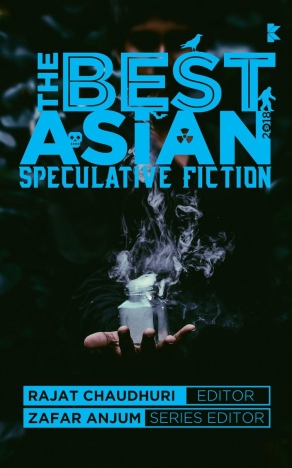 Assessor Shendge had visited Dreamland Heights before, but never to investigate a murder, that too a particularly gruesome one of a lizard, no less.

He received the call from Deepak a little after eleven, but it was no later than noon when he reached the apartment complex. He had had to make haste—after all, it was a particularly gruesome murder. A lizard had been found killed and its head smashed in. Deepak had even mentioned its tail had been snipped off.

He gathered two assistants and himself drove to the venue. The assistants had to be risen from their Sunday morning stupor. They had hoped to stay away from the office, he knew. They must have imagined dialling into a thirty-minute video-conference to chime in their status and then snoozing the rest of the day, or better yet enjoying it with their families.

Assessor Shendge did not let them drive. They did not know how to, having come to depend on driverless cars too much. They relied on them like a clutch. The good Assessor was not like that. He needed to feel the steering wheel at his hands, the heft of the gear by his side, and the spring of the clutch at his feet. His subordinates would have been content to snore in the backseat, but his presence forbade them. They sat up straight, Bhonsale beside him and Tendulkar at the back.

“Isn’t it tiring to press the clutch all the time?” Bhonsale asked. Shendge harrumphed and directed a pointed glance at his assistant’s belly.

“Why? What hard work do we do whole day? Anyway it is very easy. You would know if you had grown up with any appreciation of the old world.”

“You are right, sir. You are very knowledgeable in these matters. You are an expert on the old age.”

“He is right sir. I have noticed it too.”

He detected no irony and a note of genuine admiration in their voices.

They pulled up outside the gate of the venue. “Bhonsale?”

They pulled up into Dreamland Heights on a rainy overcast morning. The Inspector stepped out of the jeep and admired the creamy shade of the building. It soothed and calmed his frayed nerves even as he just looked at it.

Deepak came hurrying up to him, clad in a wispy kurta and pants.

“I am so grateful you came, sir. I hope I didn’t spoil your Sunday, but it’s an awful sight. Horrible like I have never seen in my twenty-one years ever.”

“Did you find the tail?”

“No sir, but I am still on the lookout for it.”

“Take me to the crime scene first.”

The Assessor and his assistant took the stairs to the clubhouse on the podium level. The apartment complex was arranged in a manner such that the parking was in the basement, and the flats started from the first floor onwards. There were only four buildings in the complex, arranged in a diamond pattern. The area between the buildings contained the clubhouse, replete with a swimming pool, a squash court and verdant lawns.