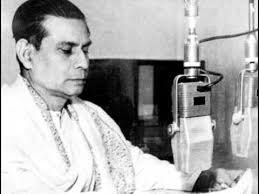 Generations of Bengalis have woken up before dawn on a date specified by the Bengali Almanac or Ponjika, to listen to a man reciting the Mahishasura Mardini – an almost two hour adaption of scriptural verses (Chandipath) describing the slaying of the demon Mahishasur by the Goddess Durga. That day is Mahalaya, and it arrives every autumn, heralding the beginning of Devi-paksh, a time on earth so holy that any death that occurs within it ensures a direct passage to heaven for the departed; as for the child born, he/she is twice blessed.

The man whose voice pours out from every Bengali home and meets the chilly misty autumnal air is Birendra Krishna Bhadra. Born in 1905 in North Calcutta, he graduated from Scottish Church College in 1928, and was involved in theatre and other literary pursuits. He worked for All India Radio and was also a playwright, actor and theatre director. His recitation of Mahishasura Mardini, which All India Radio began broadcasting from 1931, made him a legend, so much so that in 1976 when AIR tried to infuse a fresh perspective to the programme by bringing in legendary Bengali actor Uttam Kumar, it failed to impress listeners.

Birendra Krishna Bhadra passed away in 1991, but his voice still resonates in Bengali homes across the globe. Even today, families, young and old alike, listen with rapt attention to his rendition. As a matter of fact, Mahalaya without Birendra Krishna Bhadra is unthinkable. Today his recitation of Mahishasura Mardini can be easily downloaded from the internet and heard on the go, whenever one wishes to, and not necessarily on the day of Mahalaya, but listening to him on Mahalaya is more than tradition – it is ritual.

For many Bengalis, even those who no longer practice many of the traditional modes of worship or have become agnostics, Birendra Krishna Bhadra’s voice still has the power to bring them down to their spiritual knees. Every year this voice gouges out hidden emotions in the hearts of Bengalis, no matter where they are scattered. For expatriate Bengalis, this day evokes deep nostalgia; it is also cathartic, emotionally and spiritually.

There is a saying in Bengali, Shobdo Brohmo – Sound is Brahma/The Creator. Birendra Krishna Bhadra’s powerful recitation makes us all, even the uninitiated, truly feel it.

Shikhandin is an Indian writer whose story collection Immoderate Men was published by Speaking Tiger, 2017 (http://speakingtigerbooks.com/books/immoderate-men/). Vibhuti Cat, her first children’s book, was published by Duckbill in 2018. Shikhandin’s prose and poetry have won awards and accolades in India and abroad; she has been widely published worldwide. https://www.amazon.com/author/shikhandin