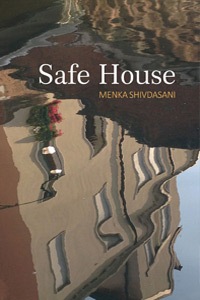 An unquiet rises in the midst of an everyday morning. Rises from the milk pot, the dishes, onion, aubergine, dining table, cupboards that stare back, tea leaves at the bottom of a cup. Even a keyhole. Beneath the day’s skin lies anger, sharp enough to impale the world.

Welcome to the world of Menka Shivdasani’s poetry. Seemingly quiet in their approach, Shivdasani’s poems take a hard look at the world both immediate to her and beyond. With themes larger than home and hearth, yet embedded in the minutiae, her poetry turns moments into pauses. It takes a poet of long experience to create such disquiet through such subtlety. But then Shivdasani is no newbie. Encouraged and mentored by the late Nissim Ezekiel, who she met as a teenager, Shivdasani has been writing poetry for decades. She was also the founding member of The Poetry Circle in Mumbai, where many well-known poets of today gathered when they first started out.

Safe House, brought out by Poetrywala, an imprint of Paperwall Media and Publishing, India, is a slim volume comprising thirty-nine poems. The book is small and slim enough to fit into a coat pocket or a small ladies handbag. The cover (photograph by Hemant Divate and design by Shilpa Dinesh) takes a Dali-esque look at a house’s façade. The surface so wobbly, can it be safe?

The title of the book suggests many things. And a sense of something not quite right, of being off-balance, lifts off even as one holds the volume in one’s hands. A safe house is where one escapes to, from persecution perhaps, yet in the very first poem, “Bird Woman”, Shivdasani squeezes out through the keyhole into the brightness beyond, where the jostling women are. But she hasn’t lured her readers out to add to the crowd. With the wings she finds, she flies, taking us with her. The persona in the poem may have made friends with birds and grown talons, leaving all else behind, but for us there are the rest of the poems…

In “Every Woman is an Island”, the dark brooding space among kitchen paraphernalia waits to be discovered. “This is the space that withstands everything…” Space that is woman herself, strong enough “to change the contours of her geography”. The next poem, “The Woman who Speaks to Milk Pots” is a metaphor for rage. Seemingly helpless, “padding about with cotton ball claws”, the persona is simmering, biding time. The warning is sprung in the last line, “watch me”. In the poem “Waiting”, Shivdasani digs into the earth, showing us the underbelly of life – disturbed worm, hungry root, snake feeling its way out – but “the crack is never deep to begin with”. The populace above, “alight with bougainvillea flame” may sit smug inside their own microcosms (symbolised by flowers in pots), but it is waiting. And when the reader pulls away from this poem of light and shadow, a slight feeling of dread remains, like snail slime.

The sensation of dread and misbalance seeps through many of Shivdasani’s poems. In some, like “Earth Mother”, she delivers a chilling message to Earth, who has almost been deified by poets down the ages. In Shivdasani’s poem you imagine a palm tree, almost phallic, growing out of Earth’s womb. The first line “time to stop navel gazing” brings out the sensual quality of seeds becoming trees, plants; nothing motherly here. And then the admonishment, the earth has nurtured the palm tree long enough; it is time now to pluck the roots out…rediscover fresh new blades waiting to grow. The poem “Tigress” is not only full of metaphors, it is a metaphor in itself. I can’t remember another poet referring to any tigress or tiger in this manner, and in this jungle “dry as the throat that is scratched and raw from the inside; dry as the river that vanished and cracked into your bloodstream.” Taut in structure and despondent in mood, Shivdasani gives us a tigress that preys upon her own flaccid skin. One needs pause after this poem.

“The Waterfall” is written in a simpler style, almost like a casual conversation, a third party looking on a couple, and the trajectory of their life, where “removing debris costs more than it does to build”. “Things Your Mother Never Told You” speaks of domestic violence, and Shivdasani uses food imageries to spring “bitter surprise”. In “Homemaker” an innocuous kitchen renovation becomes a metaphor for discordant marital relationship. Yet such is Shivdasani’s mastery, she never once mentions it, even covertly. Nevertheless one hears the din of discordance over the “clanging of the steel”, drawers that “scrape and drag”, “choked up pipes” and “roach infested drains”. And one waits for the hammers to fall. Another domestic scene plays out in “Wear and Tear”, where the “chipping walls and wobbly chairs will last a day, maybe a year or two”. And then popping in right after, Shivdasani gives us “Iron Woman”, where she promises to “turn into a plough or light up the world” and “expand without breaking”. In “Choices”, mustard seeds change colour, and “The Clinging Vine” returns us to the kitchen, and once again unnerving images emerge from food and related items. “Nursery Rhyme For A Second Childhood” use a rhythm structure that is almost like a lullaby, but its message is of grim resolve to “pick yourself up from the floor…turn back, and find me there”.

The title poem “Safe House” takes us to a subterranean place, “where the clang of manholes has been left far behind, and the sewers are alive”, once again staking a territory of unease – of that which is not what it seems. But “nobody sees” the persona, “nobody knows”, even “as the wind bombs its way through the trees”. The poem “Constructs” which precedes the title poem in the book also uses manmade structures to create a lasting imagery of the impermanence of it all, how unsafe shelter can be. The next poem “Castaway” uses water as a leitmotif, and is an unsentimental reflection on a relationship. In the poem “For Wole Soyinka”, Shivdasani compares his solitary confinement with her sense of alienation, and even though worlds apart they both “belong to confined worlds”.

Poem after poem takes us through estrangement, loneliness and the fragility of relationships. There is violence in Shivdasani’s poety. Sometimes explicit as in poems like “Sepia Tome” and “Veils”, but more often delivered through disarmingly gentle and image rich words. She juxtaposes lightly turned phrases with brooding weight. Turning them into harbingers of a disturbing place, perhaps an entity waiting to pounce. Her poems give the impression of taking her readers to a corner, and turning abruptly away leaving behind a mere hint, at times as so subtle it could be an eyelash in a glass. You don’t know what lies ahead, but that discomforting feeling is always there. Comfort and solace are not predictable commodities. You want to look behind your shoulder. You hesitate, your foot raised to take the next step, pondering over what may or may not lie ahead. Safe House may be a volume that can be held pinched between thumb and forefinger, but its true weight is revealed once the reading is done. For what Shivdasani leaves unsaid or less said or even deliberately distracted with her sleight of words is what weighs most on the reader’s mind.

RK Biswas is the author of a novel – Culling Mynahs and Crows (Lifi Publications, India), and a book of short fiction – Breasts and Other Afflictions of Women (Authorspress, India). Her third book – Immoderate Men – is forthcoming from Speaking Tiger Books in mid-2016. Her fiction and poetry have been published worldwide. She blogs at http://biswasrk.wordpress.com