The girl would have been more beautiful had she not been sobbing for breath. She was attractive enough, though. Maybe it was the fear in her eyes that added to her vitality.

He had slept badly as usual. It had been almost sixty years since he had slept more than an hour at a time anyway. The nightmares tired themselves out after a few hours and faded when he awoke, finally and in the dark, heart pounding and eyes wide in fear and rage. He was used to this, so he had waited a few minutes as the images in front of his bloodshot eyes dimmed, as the veil lifted, as the other girl’s screams receded into memory again. His sister. “Prah ji, mainoo bachaa lo!”

Outskirts of Lahore, summer of 1947. The colonial partition of India, deliberately hasty and calculatedly inept. Sounds of gunfire and mobs in the night, threats in the morning. Hindus and Sikhs used, for months, of seeing everything through a veil of fear. And hope, until it ran out the night the mob came banging on the door. Until the night the women, with dead accusatory eyes burning the souls of their dying men forever, jumped into wells to deny the attackers access to their living bodies. Until he escaped and ran, just one more boy joining the largest mass migration in human history, each refugee carrying a veil of hate and despair that would shadow their eyes for the rest of their lives.

This other girl, today, fifty five years later, had just appeared out of nowhere. She wasn’t there when he opened the door looking for the milk that wasn’t there in this suburb of Ahmedabad, and then there she was, suddenly, like a ghost in a white salwar kameez and a dupatta covering her face, a veil, an Indian hijaab.

Ahmedabad, beginning of March, 2002.  The mob had set the train carrying mainly Hindus alight three days ago at Godhra, a hundred and forty kilometers away. Muslims were blamed. Riots across many areas of the city, Muslims were being raped and butchered; the bellies of pregnant women were being speared, people were being set alight. Hindu mobs roamed the streets or barged into houses looking for the next Muslim, blood in their eyes as the veil of civilisation slipped once again. But unlike in 1947, the victims had nowhere to run to, the old man had thought to himself. Except, apparently, this girl, who had run, uselessly, to the wrong old man.

Crimson mist in his eyes. At last. Revenge at last, after so many years. “Kaun hai tu?” he asked. Who are you?  And then, quickly, he opened the door wide, a reflex invitation made before she- or he- changed their minds. Momentary hesitation and then she darted in like a bird escaping into its cage.

He shut and bolted the door.

Her voice dropped to a whisper, as if her coming into his house had made them conspirators in some way. Her story broken by her gasping breath, she explained. How she came to know in the factory early in the morning, before her shift ended, that there was rioting in the city. She ran home, but it was locked, nobody there, panic in her throat. Neighbours told her that her parents and younger sister had gone away to her sister’s house in a Muslim area of the city. Left word that if she returned she was to go there too. Ahmedabad was going to burn; Muslims were safer away from this Hindu dominated colony.

But, then, as she was walking away, a crowd appeared at the end of her lane almost magically. Screams of “Har Har Mahadev!” She saw sticks and rods and knives and petrol. She ran in the dark. Found him with his door open. Her father had Sikh friends; he always said they were an honourable lot…

He stopped her with an upraised palm, Wait! He went inside, the girl heard him rummaging somewhere. He returned, and her eyes widened at the sight of the sword in his hand. The huge blade oiled and glittering.

He could feel the blood flowing through his veins. His mind went numb and he thought, “Honour”! Didn’t she know that he had been waiting decades for this, his sister’s plea ringing in his ears? Fantasies of revenge, blood for blood, eye for an eye, knowing that if he killed just one Muslim girl his honour would be restored, his nights peaceful? How he dreamt of thrusting this same sword into just one Muslim girl’s abdomen and ripping her apart? Just as they had done in Lahore to another girl with a ten year old watching, shaking, hiding in the cupboard, his sister screaming for him as they killed her.

Honour? He would hand this girl over to the mob and watch them destroy her, that’s what he would do. Avenge the other. They deserved it, this lot. That is exactly what he would do. This was the moment he had been waiting for all his life. It was here now. His deliverance, this pretty girl, was right here.

Honour? He remembered his father telling him, one day after school, why a Sardar’s honour was everything. A question sped through his mind before it was quickly snuffed out- is there honour in killing this innocent girl?

He remained silent, confused for a moment; the red mist was blinding him now and he waited for it to clear, breathing hard and staring at the girl without seeing her at all. The sword shook in his hand, its metal glistening, its sheath having disintegrated along with his honour long ago.

“Har Har Mahadev!” The shouts came from far away, but they were menacing and angry and startled them both.

She darted to the window and drew the curtains shut. Looked at him in gratitude, assuming the sword was for her protection, assuming that this old man was her saviour. Assuming that Sikh honour was bound to protect the defenceless.

The shouts outside grew louder then stopped. They sounded like they were coming from the next street. Then, the sound of breaking glass, the banging on a shaky door. Somebody laughed, then the chant again. Louder. Regular. Like the flowing of a river in spate, malevolent and uncaring, blind with anger and madness. A sound arose from the crowd; that sound had no definition. It wasn’t a word, or even a curse. It was the sound of the crowd at a cricket match when the home batsman hits a boundary.

It was a roar.

The girl just stood there, trembling. Her eyes were big, black and wild, just like his sister’s had been that night. The girl’s veil had fallen off her face, and she was even prettier than at first glance. She reminded him of a chicken, one you see trussed up at the butcher’s, legs tied and awaiting its fate, eyes big with fear, soundless and frozen. Waiting. Waiting.

She reminded him of his sister.

Then, as suddenly as it had started, the noise abated. The river turned and found a new course. The jaded slogans faded. The mob seemed to be moving away.

The ruby mist returned. He couldn’t see. He should have thrown open the door and shouted out to them. Would they have heard? What would the girl have done? She was young and looked strong; he was an old man. Too late now, anyway. Next time. Next time he would be better prepared. He would go to the door and throw it open. He would call them in. They would take her away, screaming.

Never mind, old man. This girl will be done yet. The mob will be back and vengeance shall be yours. Just wait.

You can then sleep soundly.

He was suddenly very thirsty. So, slowly, weary and tired from a sleepless night, he walked into the kitchen. His arm ached and the sword felt heavy in his hand; he put it down on the kitchen counter and started making some tea. Spoke by mistake, out of politeness, just above a whisper, almost as he was talking to himself, “Will you have some tea?”

“Thank you. Should I make it?” she had walked into the kitchen, and then, almost as an afterthought, she said, “My name is….”

“Stop!” the hand came up again, shaking and palsied now, he didn’t want to know her name. Instead, he said, much louder than he had intended to, “Don’t enter the kitchen! You are a Muslim!”

The girl stepped back, stung. This is nothing, he thought. Wait awhile. Your death is written today. Your fate was sealed more than half a century ago. Just you wait.

The dead have no names, anyway. My sister, does anybody remember her name? Besides me, there is nobody else alive who knew she even existed, except her killers. And even they never knew her name. Only her religion. Swine! If only I had been five years older, if only I could have one of them in my grip now! Or their families. If only, for five minutes! Then I could sleep without nightmares.

He walked back, carrying the sword and his tea, her tea left unmade. Sat down heavily on the peeling cane chair. The girl stood near the kitchen looking him with dead eyes.

The first sip scalded him.

Somebody banged on the door four times very loudly.

The girl whimpered and ran into the kitchen.

He put his cup down on the floor and picked up his sword. “Wait!” he said, for the hundredth time today. “Wait!” He glanced back at the kitchen. Went to the main door and opened it wide.

Five men stood there, cloth covering their faces, lathis in their hands, one of them holding an axe. The colour of saffron everywhere.

“It’s me, Gopal from next door”, the one in front said.

“Yes?” he turned, beckoning him in. Gopal did not move from the door.

Another boy shoved Gopal aside angrily, “Did that Mussalmani come here?”

“Which one?” he said, wearily. Was that a sound in the kitchen?

“That teacher’s daughter, you know the one who lives near the phone booth at the other end of the basti?” And then, belligerently, “Gopal saw her running this way and called us. Where is she? ”

“Where is she?” the man interrupted again. Then giggled, “We have been waiting for years to take care of her, too.”

The old man turned back. And then, almost before he could stop himself, the words came out, unbidden, like a veil falling off a face.  “But she didn’t give me a chance. She ran away before I could bring out my sword.”

After a while, he shut and bolted the door. He heard their footsteps outside, fading away. Waited. Waited.

When he turned again, the girl was standing at the kitchen door staring at him, chest heaving. He could see her clearly now, the red veil gone, just a colourless diffuse mist as if he was seeing through his tears, or perhaps hers.

She knew she was safe here; there was no fear in her eyes now. 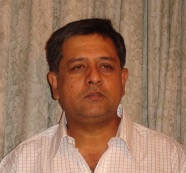 Before stepping ashore, Manu Mahajan was a ship captain on oceangoing cargo ships for fifteen years. He has, in other brief incarnations, looked after maritime operations off Singapore and a software company in India. For the last many years he has written a weekly column for a magazine on marine affairs and trained some of those who go out to sea.

Manu lives in Hyderabad, India, with his wife and cat and writes prose and poetry sporadically. ‘Veil’ is one of the many short stories that he wrote at sea.