“I found the review to be very perceptive, particularly his points about further contemporizing the book as well as Mr Bala’s voice taking a bit of a back seat. I will take careful note of this and ensure that I don’t fall into the same trap while I write about Mr J Y Pillay. But regarding the title of the book, I would beg to differ. It is not anchored in a wish to gain out of the SG50 celebrations but actually emerged organically while I wrote the book. If you read the book it actually traces Mr Bala’s journey in discovering his own identity – the British, Japanese, Indian, Malay, Tamil influences which were at work and then the final confluence of all these cultures and his alighting on what was his own or the Singaporean identity. To explain this further I give below a poem I had written on the occasion of the book launch and which I hope to include in the 2nd edition of the book:

An Indian in Singapore

He heard the word first when they had their backs to each other
His mother was intent on her spices
Grinding into dull submission
Frisky corns of pepper
Fiery red chilli, a genteel nutmeg
While he faced the door
Angsana trees beckoned
Balding patches of the football field in Racecourse Road

A whittled sun filtered in through the attap roof
He saw the word dance around him in little coins of light
Noticed the achromic floor, a split toe nail
You are Indian, you have to be decent
His mother said

Images of little boys in little coattails
Airing dogs at the promenade
Proud as the fat queen
In a country as distant as Naples or Batavia
Indian
Calm, dignified, of unfailing good taste

February 1942
Ghostly shadows rose from the yellow loam
Tonsured, skinned, horrible
A cloud of fine bone dust hung low
Over a land pitted and pared
As the waters of Blakan Mati keened its dead

And then came the moment of genesis
Parting darkness from light, the trite from the truth
Footfall of a stranger in the crescent*
And patriotism spread like a forest fire
Burning down undergrowth and small desires
While survivors stood tall
Pulsating, victorious, irascible
The fire had entered their veins

It came visiting their kampong as well
Snaking in through lorongs, shooing away cattle and poultry
And smouldering, waited – fearsome and fascinating
Licking at the edges of their home

The drum-roll receded, the kings were back
But so were the men
Lice crawled under their skin as they sang songs of freedom
Their eyes burnt with a fever, they were unable to sleep
He wondered if it was the lice or the song
And knew the kings would never be king again

He was sailing the seven seas with a new intent
He faced his mother as the sun set over the wharf
Looked at her as if for the first time
The silver twine in her hair
The five stars of her nosepin like fireflies
He bent low and whispered into her ear,
Singaporean, Mother
Singaporean is what we will be 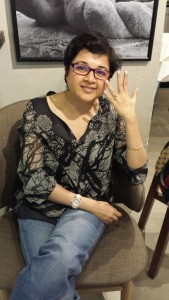 I do hope this will suffice to clarify my stance. Once again, I would like to put on record my gratitude to Mr Baljyi for taking time out to do the review.”