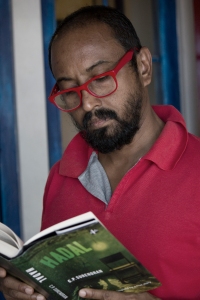 C. P. Surendran is a well-known Indian poet, novelist and journalist who lives in Mumbai. As a journalist, he has worked with India’s top newspapers such as The Times of India, Times Sunday Review and Bombay Times, among others. He was resident editor of The Times of India in Pune for three years and senior editor with The Times of India in Delhi. Until recently, he was the chief editor of a daily, DNA. A selection of his poems was included in Gemini II (1994) and since then he has published several collections of poems: Posthumous Poems, Canaries on the Moon and Portraits of the Space We Occupy. His first two novels are An Iron Harvest and Lost and Found.

His most recent novel is Hadal, which has attracted a great deal of attention in India because of its unusual theme and the choice of narrator. It is ‘a tale of international espionage, loves lost and found, desire and power’ set in Kerala, Surendran’s home state. It’s based on a true story. At the centre of the plot is Miriam Zacharias, a young woman from the Maldives who has lost her family in the tsunami. When she appears in the novel,  she has resigned as a minor security officer assigned to the president of the island nation. Just out of her marriage,  she wants to pursue ‘her dream of writing a novel’.

‘She comes to Kerala, where she seeks out a former lover, Roy, who happens to be a senior scientist in the Indian Space Research Organisation (Isro). She also runs into a disgruntled policeman, bearing the unlikely name of Honey Kumar, who has been banished from Delhi for a routine misdemeanour involving a bribe. These three people find themselves embroiled in an increasingly sordid tale of love and lust and power and intrigue, driven largely by Honey Kumar’s overwrought mind and underserviced libido, which coagulates stickily into an international spy scandal. The time and place for these lives to converge in the most unfortunate way is the visit of the Maldivian president to his ancestral village in Kerala. And when you learn that the president has a double, you know that the plot of this novel is in fine shape…’ (From Hadal’s review in Mint).

Surendran has also written a film, Gour Hari Dastaan which releases in theatres on August 14. The film, directed by Ananth Narayan Mahadevan, is a biopic depicting the real-life travails of Gour Hari Das, a freedom fighter who fought the government for 32 years to be recognised as such.

We recently interviewed Surendran over email and asked him about his new novel and his writing life:

When I heard of ‘Hadal’ I was intrigued by the title. What are you trying to show in this novel?

A process of the mind. How deceptive we are instinctively. A woman– Miriam in Hadal for instance– could be a notion. A crowdsourced product. An Indian genius is the telling of the story. The oral traditions in India are strong even now. The fact that the average Indian is a liar is part of that grand narrative. I hope I don’t sound judgmental, because that really is not the intention of the novel. When I say lie, I’m conscious that a lie is often a wish. When a man or a woman lies about her age, she merely wishes she was younger. In the case of Honey Kumar, the prurient, corrupt and imaginative protagonist of the novel, the ability to fabricate is natural. When he builds out of his head a whole alternative reality with the active help of other people to present Miriam as a spy, the crowdsourced nature of the process takes a life of its own, involves institutions and systems and turns Miriam’s universe upside down. She is caught in the currents and physical laws of another world. It may not be true, but is it any less real for all that? Hadal is about the social media nature as if it were of our reality.