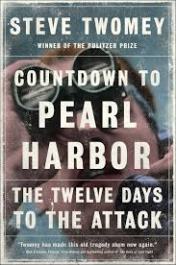 The narrative is told through a handful of key protagonists. By looking at personalities rather than dates and events, Twomey shows how overconfident individuals can make assumptions and basic errors that change the course of history. He also manages to inject suspense and tension into a tale whose ending we all know.

One of the startling realities Twomey examines is the level to which war between the U.S. and Japan was expected. Some accounts treat Pearl Harbor as a shock that literally came out of the blue — but that simply wasn’t the case. Almost a year before hostilities began, people in the U.S. Army and government — and even in the popular press — were discussing the possibility of a war with Japan. The Navy in Hawaii was told to prepare but warnings were dismissed. Twomey argues that the military was secure in “false” and “racist” assumptions that the Japanese couldn’t out-think them or even manage something as audacious as an attack on Oahu. Those in positions of responsibility did nothing. Twomey shows convincingly that they could have stopped the attack. Read more