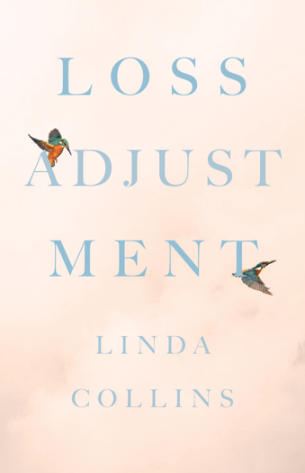 Loss Adjustment is a non-fiction work by Linda Collins, a New Zealander who has lived in tropical Singapore for almost three decades. Collins, a wife, mother, and copyeditor with the republic’s English daily, The Straits Times, suffered a devastating loss when her only child, Victoria Skye Pringle McLeod, decided to take her own life on April 14, 2014. She was only seventeen.

The memoir takes an unflinching look at the devastation wrought on Collins and her husband, Malcolm McLeod, as they tried to come to terms with their daughter’s death. Loss Adjustment starts with a glimpse into Collins’s normal morning routine in their home, where she, like other mothers, rises early to prepare for her daughter’s first day of a new school term. However, the routine was disrupted when Victoria (lovingly called Vic) was nowhere to be found in their condo. Before discovering that her daughter was missing, Collins had a strange dream where Victoria said: “I’m free, I’m free”.

Panicked, Collins woke up Malcolm and they started searching for her. An ominous feeling loomed over Collins as she ran towards the hill that led to other condominium blocks. As they wondered where their only child was, the building security guard, Mohan, arrived on his motorbike. But something was amiss — the burly and kindly man was sobbing. He conveyed a piece of bad news — Victoria was dead. She had taken her own life by stepping off the ledge on the 10th floor of a condominium block.

Victoria’s passing plunges both Collins and Malcolm into despair as they try to understand what drove their daughter to commit suicide. Divided into four chapters: Loss I, Loss II, Adjustment I, and Adjustment II, each section tells a story of their grief and how both of them try to adjust to their “new life”. Readers will come across oscillations between why and what if as Collins tries to search for answers through past reflections, and Victoria’s journals that were found after her passing.

In this heartfelt memoir, readers find themselves traversing various emotions — mainly loss and grief experienced by Collins as she tries to make sense of her new reality. Accepting the death of a loved one, especially one’s child, is never an easy task or experience. Armed with a dogged determination and skills as a journalist, Collins examines and questions what drove Victoria to commit an irretrievable act. She reached out to individuals who might have interacted with Victoria in the months and days leading up to her death and these people include teachers, friends, classmates, and neighbours.

The memoir’s title is also an allusion to the role of a loss adjustor, as Collins was demanding accountability from the insurance company for the destruction of their Christchurch house in an earthquake in 2011. Loss adjustment is an actuarial term and in the loss of a property, one can be compensated adequately in the monetary outcome, but such an outcome is not possible when one loses her daughter. Loss Adjustment was written as part of a Master of Arts in Creative Writing at the International Institute of Modern Letters at Victoria University, New Zealand. It is also partly based on Victoria’s journals that Collins discovered in her laptop after her death.

Loss Adjustment is a raw, unfiltered and heart wrenching read, as it reflects a survivor’s fragmented state of mind. Adjustment is tricky — even more so as Collins tries to normalise her life after the funeral yet wanting to hold on to the pieces of her daughter that made her whole. A few days after her passing, Collins received a broken necklace with its crescent moon pendant still intact from Mohan. It belonged to Victoria. She wrote: “Is this macabre memento, this blood moon burnished on silver, and risen from my daughter’s destruction, this gift of the afterlife, mine to keep? I know I want to keep whatever I can of whatever is left, even if just a drop of her blood on a metal moon.”

The book also takes readers into the heart of a Kiwi family, where Collins shares their life, experience, and challenges of daily living before, during and after Victoria’s tragic death. The intensity of each chapter reels the reader into the memories shared by Collins in the book and reflects the nuances, beauty, stresses, and challenges of an expatriate family living far away from home. While it is a book of unconditional love, it prompts us to question how well we know another person.

Loss Adjustment captures the immense love Collins has for Victoria from the day she was conceived, and how perfect she was in her eyes. The memoir shows her willingness to embrace every aspect of Victoria’s life, and also her death. As a parent, Collins has also successfully raised uncomfortable questions revolving around mental health, accountability, social inequality, sexual identity, as well as spiritual struggles. It also gives readers a chance to learn and love Victoria through Collins’ collective memories.

It helps readers to understand Victoria’s complexity, her intelligence and her ability to write beautifully, aside from admiring her courage as she struggles to “fit in” amongst her peers, and finally her deliberation over her death. She wrote: “I have let this cowardice envelope me, and I can’t shake it off. I will commit the worst thing you can ever do to someone who loves you: killing yourself. The scary thing is, I’m okay with that.”

Loss Adjustment tells readers that it is okay to reach out and seek help and constant support from loved ones is vital to prevent suicide from taking place. It dwells on the negative impact of  bullying. Loss Adjustment also urges us to comprehend beyond the self another person projects.

Even though it can be a painful read at times, especially the first twenty pages that recount Victoria’s death, Loss Adjustment is a masterpiece and a stunning portrayal of Collins’ strength, her relentless quest and struggle to carry on with life, and, most importantly, a testament of love that she has for her only daughter, Victoria, even though she only continues as a memory now.

Koi Kye Lee is a senior journalist with an appetite for current affairs and politics. She has worked in both Malaysia and Singapore. Her first fiction was published in Write Out Loud, a compilation of short stories by young Malaysian writers.