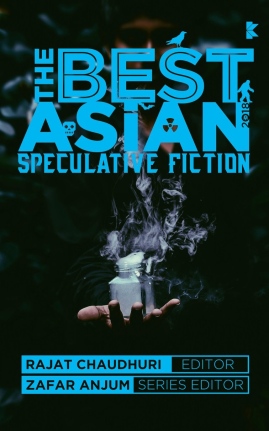 Gopuji tore away the blanket. His shirt was drenched in sweat. He dragged himself out of bed. When he foamed toothpaste in his mouth, he heard it again. It seemed to be a classical tune of great melancholy, of Western origin rather than a Hindustani one. It flooded his ears. His temples throbbed. Sudden chills in the forty-degree Mumbai heat and humidity. He remembered last night’s dream of feathered attacks. Yes, that was what it was. Wet wings slapping at him as if they would murder him in a pond or lake … hard forceps-like things clutching his neck … a thick fleecy rope winding around his neck … tighter and tighter, claws gripping him and tearing his flesh.

Even the memory of it sent streams of sweat down his body as he showered and got ready for work. The lilt lingered into his hearing.

Gopuji was accustomed to background music. In fact, he was more used to it than most average people. He was a filmmaker. How many times, while making films, had he ardently wished for a personal background score? A score that would act like lyrical second thoughts, drizzling around him, making his life more meaningful and understood by those around. Was it this wish that followed him now? This principle that if you wished for something strongly into the Universe it was bestowed upon you?