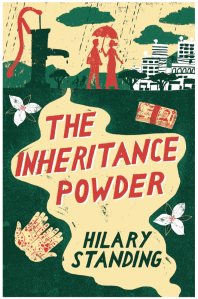 Intrigue in the Development Sector

Professionals in the development sector often complain that putting together the notoriously impersonal, jargon-filled proposals and reports eats away at their ability to write evocatively. In her novel, The Inheritance Powder, Hilary Standing proves that it is possible to be otherwise. A long career in international development allows her to draw out a relatively refreshing story from this field.

Like her, one of the two main characters is Carl Simonovsky, an agricultural economist based in London. He specializes in East Africa but feels compelled to take on an assignment in Bangladesh so that he can add to the income generating portfolio of his employer, the fictional Institute of Poverty Alleviation. Carl is needed for a cost benefit analysis of solutions to Bangladesh’s arsenic problem on behalf of an aid agency. He is not convinced he should take on the task—he has not heard of the problem before and has no experience in South Asia. His faith is dwindling in the kind of economic models he has been asked to make. However, he reminds himself that ‘in the last year, considerations of ignorance, ethics and scepticism had not stopped him from providing policy advice’ on topics as far-flung as tourism and healthcare in other geopolitical regions outside of his expertise. Even after he arrives in Bangladesh, Carl muses about this ‘small, slippery compromise with integrity’.

In Carl, the author puts a more human face on the stereotype of the ‘male, pale and stale’ international consultant. His hesitation, confusion and regret are just some of the aspects of the development sector that the book portrays realistically. The harried director of the aid agency who hires Carl’s services is, perhaps regrettably, seen all too often. Ahmad, the national consultant who knows all the key contacts and local context of the arsenic problem, but is only paid a third of Carl’s fees, is also uncannily familiar.