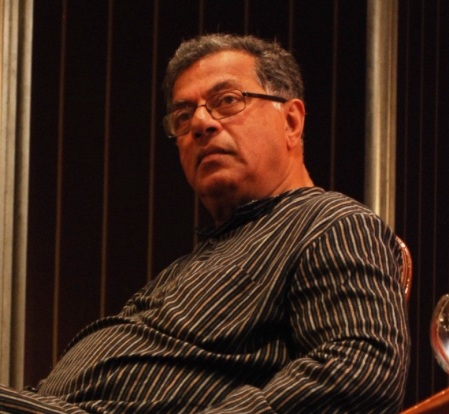 Veteran actor, playwright and multi-lingual scholar, director Girish Karnad(1938-2019) died on 10 th June, 2019. He was eighty-one. He passed away peacefully at his home due to old age. He is survived by his widow, Saraswathy Ganapathy, his son Raghu Amay and his daughter Shalmali Radha.

He was cremated quietly by his family.  No fanfare or rituals were allowed as per his last wishes.

Prime Minister Modi tweeted that this great Jnanpith Award winner will be remembered for “his versatile acting across all mediums,” and his work “will continue to be popular in the years to come”. Opposition leader Rahul Gandhi wrote that India “has lost a beloved son, whose memory will live on in the vast treasure trove of creative work he leaves behind”.

END_OF_DOCUMENT_TOKEN_TO_BE_REPLACED

Lined with trees on both sides, a narrow alley leads one to the cloistered quarters of the house where Mustansar Hussain Tarar writes. He spends most of his day in this room. Almost all of his novels, travelogues, plays, and columns were written in this room. Despite being in the vicinity of Firdous Market, this particular neighborhood in Gulberg III has an air of tranquility about it. There are two parks in front of Tarar’s house. A few years ago, when I went to meet him for the first time, he had said, while giving directions, “There is a park right in front of the house, with a slide for kids. If you look in the direction in which kids slide down, you’ll be able to see my house.” The slide is no longer there.

The room opens into a small, narrow hall full of antiques worth thousands of dollars. Tarar has been collecting antiques for decades.

There is a kind of deliberation to the way Tarar’s writing table is arranged. Coffee mug-shaped penholders sit in a neat queue by the wall on his writing table, with pens, pencils, paper cutters, sharpeners, a letter opener, and a stapler stowed separately. There is also a solitary ashtray sitting on the table. On one side of the table, there is the latest issue of Loh (The Slate) along with a couple of files and a few documents. There is another table in the room with a folding tabletop. Tarar told me that the carpenter who made the table had died and that this was probably one of the last tables of its kind. He lifted the tabletop and slid open a wooden tray, which converted it into a writing table.

Right next to this table is a tall cupboard stuffed with books. A few paintings hang on one of the walls. One of them is by Sadequain. A huge portrait of Tarar by Saeed Akhtar hangs on the wall adjacent to his writing table. Saeed Akhtar also made a bust of Tarar’s, which is placed on the table by the sofa. There is another portrait of Tarar’s made by Bashir Mirza, which depicts Tarar as a carefree vagrant.

END_OF_DOCUMENT_TOKEN_TO_BE_REPLACED

Faith Ng is a playwright and an Associate Artist with Checkpoint Theatre. Her plays wo(men) and For Better or for Worse, have both been nominated for Best Original Script in the Life! Theatre Awards. Holding a Master of Arts with Distinction in Creative Writing (Scriptwriting) from the University of East  Anglia, Faith was the the writer-in-residence for the Singapore Creative Writing Residency program in 2014.

I first met Faith in March 2014 when we were put on the proposition team in a debate organised by The Arts House as part of their 10th Anniversary celebrations. The motion was “Singapore can be a city of literature” and I was immediately struck by her maturity, eloquence and sincerity. It is easy to see why she has become known for her honest, sensitive plays that touch on topics and issues that can make Singaporeans uncomfortable, but can also relate to.

Out of all the creative arts, why did you decide on a career as a playwright? What is it about theatre that appeals to you?

I am really an accidental playwright. I had been writing prose fiction for a long time (which I suspect is how many Singaporean writers start out because of all the compositions we have to write for school.) I was also painting a lot and toyed with the idea of being an artist. I stumbled upon playwriting during my first year in NUS when I took “Introduction to Playwriting” taught by Huzir Sulaiman. I discovered that playwriting combined my love of words with my penchant for strong and symbolic visual imagery.

More than that, it was really the live element of theatre—real physical bodies moving in space— that got me hooked. There is something absolutely magical and thrilling about watching your words come to life on stage, always a little different from what you imagined it to be— sometimes better, and sometimes worse, but never the same each performance.

Writing can be a terribly lonely business. In theatre, you never work in isolation. It takes a village (the production team and the creative team) that supports each other and strengthens each other to make a production happen. You get to work with people who have different talents and points of view from you, and you learn a lot from them.