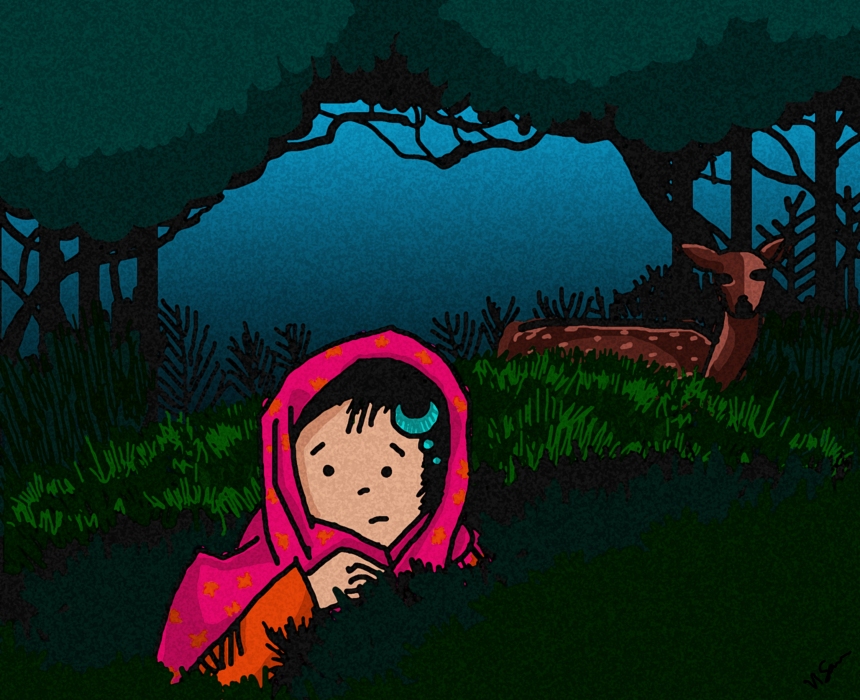 Even now, after all these years have passed, rivers, all rivers, hold a certain fascination and dread for her. Back then before rivers of blood had been shed, when there was not even a ruby blood drop, not even the tiniest nipple dot to prick the endless flow of a day, it was Nubia herself who was the river.

Theirs was the last house at the phallic tip of the cantonment cul-de-sac, lined with rows of colonial era brick and limestone bungalows. Beyond their back garden lay the great glimmering eye of the lake, Moti Jheel, where Nubia was forbidden to go by herself. Under Ayah’s watchful eye, she would play for hours with Anmol in their garden full of banana trees, where the siblings would go goose-stepping round and round the lawn, “Left right! Left right! Pajama dheela, topi tight! Aagey husband peechay wife!” until they collapsed in dizzy heaps of giggles on the grass. When she got up, Nubia was thirsty. She stuck her tongue out and caught the drip of recent rain from the glistening elephant ear banana leaves in whose lap sat fat yellow fingers of fruit plush with beckoning. Ayah mashing up the bananas, putting salt, pepper and sugar in them. The butter-yellow disks sweating until they swam in their own spiced up juice. Banana chaat was yet another one of Ayah’s delicious creations. There is nothing, however, that Ayah could do to milk to make it palatable to Nubia’s six-year-old tongue.

“Every morning she throws the milk down the sink when I’m not looking! Begum Sahib I strained this milk with muslin twice and she still didn’t drink! Ayyo! My bones are too old for this. Look at Anmol Baba. Every day he drinks down two glasses of milk. Gut gut gut. Drinks it down. See how fair he is? You will be as black as coal if you don’t drink milk and then no one will marry you!” END_OF_DOCUMENT_TOKEN_TO_BE_REPLACED