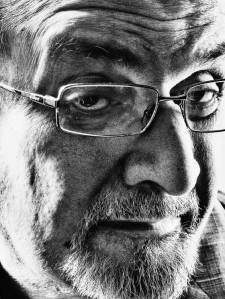 “One of the problems of things being long ago is that the heat goes out of them,” says Salman Rushdie, almost 25 years after Ayatollah Khomeini sentenced him to die, Rushdie is still probably the world’s most famous living writer. It’s the morning of the death of Margaret Thatcher—a political enemy of Rushdie the thirtysomething who became a guardian and defender in what he calls sweetly, several times, “the case of me.”

“She was very charismatic, and knew exactly who she was, and didn’t give a damn if you didn’t like it. I’ve never been a Conservative voter—no secret there. But when I needed it, she offered me what I needed to stay alive.” Imitating their first meeting, a few years into his hiding, he pats my arm reassuringly, turning me into him and himself into Maggie. “When you think of the Iron Lady, and then she comes on like your auntie—that was very unexpectedly tender.”