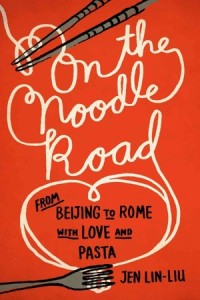 On the Noodle Road is one attempt to answer an old chestnut: Did Marco Polo really bring noodles from China to Italy? If not, where did they really come from? Or — to put it another way — from what point along the storied byways of the Silk Road did that humble paste of flour and water first spring into its multifarious existence?

This is the second outing from Asian-American food writer and Beijing cooking school proprietor Jennifer Lin-Liu. In her first, Serve The People, Lin-Liu chronicled her education in traditional Chinese food ways. This book, set shortly after the previous one ended, finds the author a year into her marriage, still running the school, wondering where to go next. And while it’s a search for the truth of the noodle’s origin myth, it’s just as much a quest to sort out her own identity and place in the world.