The Four Colors by Ankur

The fifty-odd poems in this collection all reflect the different hues of life as well as different stages of growth of a person. The poems find themselves divided naturally into four sections: Green (birth), Yellow (disillusion), Purple (rebirth), and Red (self-realization). The irrepressible current of life, in its various manifestations, runs through them all.

END_OF_DOCUMENT_TOKEN_TO_BE_REPLACED 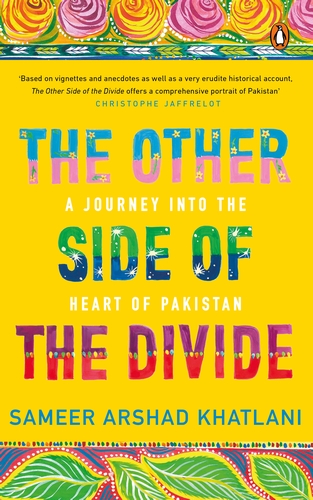 Pegged on journalist Sameer Arshad Khatlani‘s visit to Pakistan, The Other Side of the Divide provides insights into the country beyond what we already know about it. These include details on the impact of India’s soft power, thanks to Bollywood, and the remnants of Pakistan’s multireligious past, and how it frittered away advantages of impressive growth in the first three decades of its existence by embracing religious conservatism.

END_OF_DOCUMENT_TOKEN_TO_BE_REPLACED

Throughout 2015 and 2016, the Twitter hashtag, #JugaadNation became a social media sensation with popular websites like BuzzFeed showcasing the ‘hilariously creative ways Indians get shit done no matter what’. There was a bicycle where a missing handlebar was replaced with a car steering wheel, a broken shower head replaced with a taped plastic water bottle pricked with dozens of holes at the bottom. Household irons were shown being used to straighten women’s curls or upturned as hotplates to boil milk. Air conditioner units with missing grills became chillers for beer while a desert cooler was adapted to cool two neighbouring rooms by attaching a pair of old trousers to divide the flow, one leg for each. There were pressure cookers propped up by two bottles and heated by burning candles taped together, a shattered clock missing numbers 1 to 7 made good with the digits scrawled onto the wall on which it hung, and endless varieties of crop-sprayers and ploughs made from bicycle wheels, discarded oil barrels and bits of old scrap metal.

There were stories too, along with pictures. In November 2016, when Narendra Modi scrapped ₹ 1,000 and ₹ 500 banknotes to target black money and corruption, India’s ATM machines were suddenly under siege and customers were forced to queue for many hours to get cash. Satjeet Singh Bedi had a jugaad solution to hand—he set up BookMyChotu.com to supply labourers to stand in line on behalf of the well-to-do who could hire a chotu—which literally means ‘little one’—for ₹ 90 per hour to take the pain out of Modi’s demonetization.

These pictures and tales went viral on a global wave of LOLs and OMGs, shared by Indians as a celebration of their inspiring resourcefulness and optimism amid scarcity and poverty. It reflected the extent to which jugaad had been claimed as a treasured ‘we are like that, only’ Indian trait.

In his book, India’s Century: The Age of Entrepreneurship in the World’s Biggest Democracy, veteran Congress leader and former cabinet minister Kamal Nath described how jugaad creativity had blossomed in the hardship of India’s early post-independence years. The shortage economy—when Jawaharlal Nehru’s government curbed imports and restricted foreign investment in favour of domestic production—demanded frugality and turned ‘every Indian’ into a ‘master of jugaad’.

END_OF_DOCUMENT_TOKEN_TO_BE_REPLACED

Tokyo has been a subject of literature for centuries, and continues to inspire writers today. These ten fiction and […]

The National Book Development Council of Singapore (NBDCS), which organises the biennial Singapore Literature Prize, has appointed three new judges in the category of English Non-Fiction to replace those who resigned in protest of the National Library Board’s (NLB) actions earlier this year.

END_OF_DOCUMENT_TOKEN_TO_BE_REPLACED

In her article on these pages, Are novels a waste of time in today’s data-driven world?(May 8), Deborah Lindsay Williams wrote that without literature, there would’t be much opportunity to “develop the muscles of our imagination”.

I would have believed her had I not spent several hours at the 1001 Muslim Inventions exhibition in Sharjah last month. There I witnessed what happens when you ponder the universe, in awe of the creator, and follow the words of the Prophet Mohammed: “Seek knowledge even if you have to go as far as China.”

END_OF_DOCUMENT_TOKEN_TO_BE_REPLACED

On the Noodle Road is one attempt to answer an old chestnut: Did Marco Polo really bring noodles from […]

The New India Foundation invites applications for the ﬁfth round of the New India Fellowships. Open only to Indian nationals, these Fellowships will be awarded for a period of one year, and will carry a stipend of Rs 70,000 a month