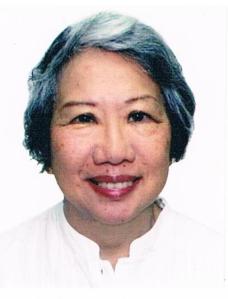 It’s what I want to do more than anything else. At this time of my life, I want to use up all that I’ve got left – in this joyous task of creating new work.

He was a man who gave his whole life to one ideal (to lift up the people of Singapore through education) and he ended his life in ignominy, disrepute, poverty. When I began this project 25 years ago I wanted to help rehabilitate him – bring him out from the cloud he had fallen under. This rehabilitation has happened since – beginning with Lee Kuan Yew’s tribute to him as an initiator of bilingualism.

I want to reflect what it means – to fight to the death for an ideal – and fail. I want to say that the most important thing is to do the task God gives you with integrity and courage – whether or not your efforts are rewarded with success, fame and glory…

I do not know what “writing aesthetic” means, do correct me if I have misunderstood. I’m impressed by Kipling’s prescription for very economical compressed prose – he recommends one to make at least three passes through the work, cutting out fat each time. I revise a lot.

I think “structure” of a work is very important, a balanced work in which all the parts work harmoniously together. This gives me the most difficulty, I struggle a lot with the structure of the works.

For novels I have developed a colloquial voice flavoured with dry irony. It was difficult to find the tone, which first appeared in The Scholar and the Dragon – addressing the reader with both familiarity and detachment. There is a good deal of code-switching and changes of voice going on through a work like 4 Pax to Emptiness. I think I’m trying to suggest the layered textures of Singapore.

Who are your favorite authors?

The current musical (untitled as yet) on Lim Boon Keng. I’ve been working on it off-and-on for more than twenty years. His life story is long, complicated, and packed with historical detail. It is so difficult to cut through the history and make an art-work which will move the heart, inspire the soul. After innumerable drafts over the years, I am now working on what should be the final version – with the help of the English Department at NTU where I have made this the project for an MA degree.

Writing. Being in the groove. The moment when one writes “THE END” at the end of the first complete draft.

Taxi drivers that refuse to stop to pick me up, even though they display the green sign that says they are on service.

The LBK musical to work on.

Passport, IC, handbag with credit cards… because  it’s such a hassle to try to replace them. Seriously – all other material things can be let go of. Would be a bit of a relief – then I don’t have to sort through all the old books and clothes and decide how to dispose of them. I think all my important work is stored online… I better make sure I update it.

As above: the most important thing is to do the task God gives you with integrity and courage. I first formulated this in my first book at age 15…

Stella Kon was born in Edinburgh and educated in Singapore. She has lived in Malaysia, England and Scotland, returning to Singapore in 1986. Stella has written plays, novels, poems, short stories and musicals. She won the National Playwriting Competition three times, culminating with Emily of Emerald Hill. She is the Chairman of Arts Charity Musical Theatre Live! Her latest musical is EMILY – the Musical. For more details, please visit: http://www.emilyofemeraldhill.com.sg.