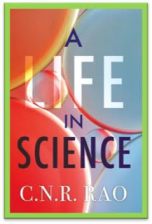 A Life in Science by Prof. C.N.R. Rao talks about his journey into the discipline, giving us valuable insight into what it takes to become a great scientist. The book is published by Penguin.

The book covers his early years and the odds he had to overcome while chasing his dream of pursuing a career in science. C.N.R. Rao provides a rare glimpse into the life of one of the most eminent, dedicated and widely respected scientists of post-Independence India. He also talks about prominent scientists of the past and present, whom he was inspired by.

C.N.R. Rao also presents a detailed account of the kind of commitment that is required to achieve success in the field. He offers invaluable advice to young people who desire a life in science and suggests ways to deal with the inevitable roadblocks that crop up in the pursuit of excellence.

C.N.R. Rao is an internationally renowned chemist, who has worked in solid state and structural chemistry, and has contributed to the development of the field over the last five decades. He is a member of all the major science academies in the world and is a recipient of the Dan David Prize for materials research. He has honorary doctorates from seventy universities, and has authored 1500 research papers and forty-five scientific books. He is a National Research Professor, Linus Pauling Research Professor, and honorary president of the Jawaharlal Nehru Centre for Advanced Scientific Research ( JNCASR), Bangalore, which he founded in 1989. He was conferred India’s highest civilian award, the Bharat Ratna, in 2014, by the President of India.