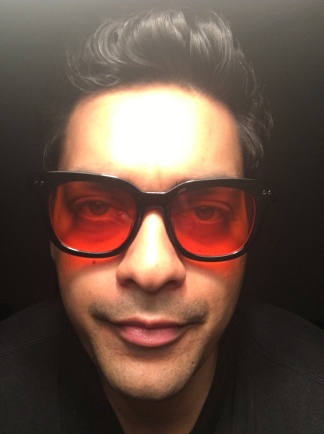 Not to sound too dramatic, but it is something I can’t stop doing. It’s how I make sense of things around me. There’s this French phrase that I can never pronounce correctly, but I feel it represents a lot of my reasons for writing. “l’esprit de l’escalier” – literally the spirit of the staircase, figuratively – things I should have said. This need to speak applies not only to my personal life, but to anything that moves me about the wider world.

My most recent book is called Dvarca and it is the first of an admittedly ambitious trilogy. It imagines a future dystopian world, where India has become a fascist nightmare with a bicolour flag and a new name – Dvarca. My reasons for writing this book are related to a troubling childhood experience, that I think I share with most people of my generation. We were kids when the Babri Masjid was demolished. We were kids when the blasts shook Mumbai and riots took lives. These incidents left a mark on me and made me aware, for the first time, that friction or unresolved anger exists in society. Dvarca is a way to take these divisive elements, and project them into the future while imagining the worst. It is speculative fiction that hopes to find a peaceful way back from a horrible scenario. I made a short video to explain my motivations for writing Dvarca.

I hope I see things differently and try to give them new life by recording them. This often makes for odd digressions and some indulgences, but they are all in service of bringing the reader into my world. The most important thing for me is to give the reader something new and exciting in the form of an idea or an expression. I understand that this obsession with exploring can lead to work that may challenge some readers. I just hope that their sense of the extraordinary matches mine.

It’ll sound like I’m plugging my book, but to be honest, Dvarca is the toughest piece of writing I have ever attempted. For three reasons:

First there were many occasions when I would stop mid-sentence and wonder if I was crossing the line, entering dangerous and unchartered territory. This was echoed by some publishers who rejected my work, finding the content risky.

Second, an entire world had to be created for this trilogy. It was not easy balancing character development, the story and world-building all at the same time. I hope the final published “mix” is palatable. Though one can never please all.

Thirdly, I gave myself the challenge of writing a story that did not answer violence with violence. Very often, books in the dystopian genre end up sticking-it-to-the-man with a bloody rebellion or uprising. My goal with the Dvarca trilogy is to bring change without becoming what you hate.

Learning something new and applying it gives me a lot of pleasure. I get to do this in my work, where as a writer you can immerse yourself in new emotions and knowledge and walk around in them as if they were your own.

Too many things. Anything that diminishes human dignity. Bigotry. Absolutes. Dictators. Assholes. As you can tell, the news makes me seethe these days.

What books would you take with you on a three-month retreat in the boondocks?

In no particular order: The Master & Margarita, Steppenwolf, The Buried Giant, Between the World and Me, Dune, The Sellout, The Stranger, The Sympathizer, Leaves of Grass, Ubik (actually all the works of Philip K. Dick), Fever Dream and Faust.

Question everything, but know when you’ve asked enough.

Madhav Mathur was born and raised in Delhi. He lives in Singapore, where he works for an MNC by day and as a writer-filmmaker by night. His first novel, The Diary of an Unreasonable Man was published in 2009 by Penguin. His award winning films, The Insomniac and The Outsiders have been screened at numerous festivals. Dvarca, published by Fingerprint Publishing is his second book and the first of a dystopian trilogy. He tweets at @madhav_mathur.

Aminah Sheikh is the Online Editor of Kitaab