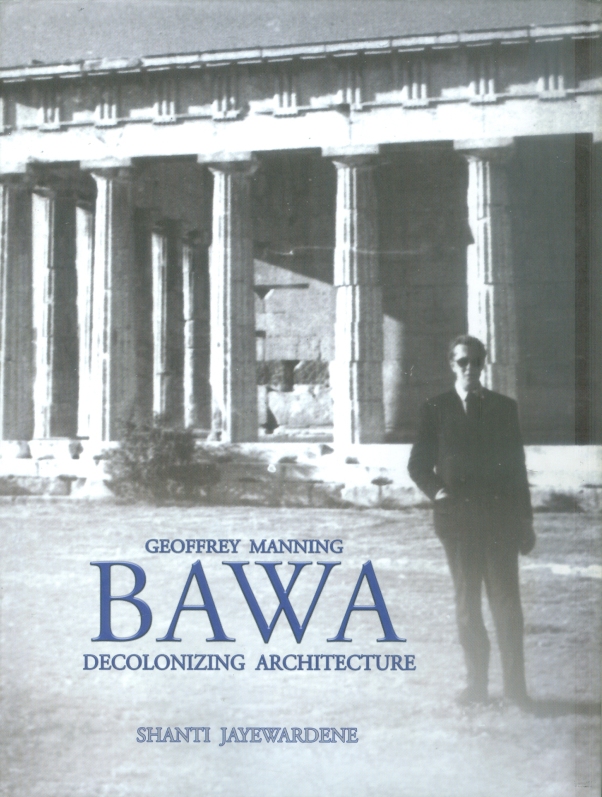 In the monograph titled Geoffrey Manning BAWA, Decolonising Architecture, the author, architect and historian, Shanti Jayewardene examines the enduring architectural legacy of Bawa and how he sought to decolonize architecture from within the tradition, incorporating indigenous Sri Lankan motifs and spirit into the existing corpus of western architecture.

It is Bawa’s attempt that culminated in the birth of Sri Lankan modern architecture, which is now also known as tropical architecture.  The author emphasizes, in no uncertain terms, that the term ‘decolonizing’ does not mean anti-colonial and that Bawa’s architectural legacy should be looked at from a broader perspective, perhaps, as a part of the process of indigenous knowledge production.

At the very beginning of the book the author points out that the field of architecture and study of architecture, like almost all other subjects, was a colonial legacy and the essential part of ‘colonising the mind’ was to look down on the indigenous knowledge as unscientific and obsolete.

‘The architectural “profession” in Sri Lanka has a colonial lineage. Its birth in the nineteenth century announced and affected a distinction in knowledge through apartheid policies of employment linked with knowledge. Only Western-trained individuals were recognised as architects or engineers. J. G Smither was appointed architect of the Public Works Department (PWD) around 1864. The post was held by Britons until independence. In Colonial institutions indigenous knowledge was officially subordinated to Western or so called modern “scientific” knowledge. Overlap between two systems of knowledge was suppressed in the colonial culture.’

It was obvious that the process of colonization was not confined to conceptual level of architecture.  The author observes that one has to understand the process of decolonization from a broader perspective to look back and re-read Bawa’s work. ‘De-colonization is not simple anti-colonialism – it is “the attempt of the previous colonized people to reflectively work out a historical relation with former colonizer, culturally, politically and economically”.’

The study has been carefully divided into several chapters covering Bawa’s birth, the socio-cultural backdrop against which Bawa grew up, his education and his practice in Sri Lanka. Early chapters of the book help readers to learn the myriad of influences of famous architects, diverse architectural traditions, works and books on Bawa and how his Western education shaped his early practice as an architect and how deeply he studied the Sri Lankan age-old architectural legacy, which the author has quite rightly emphasized, was not pan-Sinhalese architecture. In fact it was a tradition which was made up of diverse influences such as ancient Sri Lankan architecture, Dutch, Portuguese, Islam and Tamil architecture.

One of the prominent influences on Bawa was his wide reading over the years. Some of the major influences which shaped his world view were the work of Ananda Coomaraswamy and books such as The Wonder that was India by Arthur Basham and Senake Bandaranayake’s Sinhalese Monastic Architecture (1974).

As observed by the author, a prominent architect who influenced Bawa was Mexican architect Luis Barragán (1902 –1988).  Barragán developed his own vision with an inimitable Mexican spirit. The author observes a characteristic influence of Barragán work on Bawa’s creations in areas such as the stairs, courtyards, pools and spaces. However, both architects never met personally but it was obvious that Bawa had read about Barragán’s work featured in I.E Myers seminal work Mexico’s Modern Architecture (1952) that he possessed.