Zafar Anjum writes about his Shanghai trip in 2011

Initially I was not sure if I was going to Shanghai at all, but the visa came through. I had tried once before but was not lucky enough to get the visa (in that instance, the paperwork was not complete and so on; it’s a long story). I was totally unprepared for the journey this time. This was one of those rare journeys which I undertook without reading anything about the city that I was visiting. I think there was some innocence about this unpreparedness, this ignorance. I took Shanghai as she revealed herself to me. I didn’t go there with any fixed images, so I was neither overwhelmed nor underwhelmed when I stepped into Shanghai.

Before going to Shanghai, one of my colleagues had shown me pictures of his visit to the city nearly ten years ago. In his collection, there were pictures of skyscrapers, the famous Bund, and some Chinese temples. In the pictures, the sky looked muddy, overcast with smog. Only that image of a smog-laden Shanghai stayed with me. Avoid the beggars in Shanghai, my colleague warned me. There will be plenty of them and they will approach foreigners like you, he said. I noted his advice. From my Indian experience I knew how to avoid beggars, so I was not worried about encountering them.

The flight was normal: I read a book, watched a couple of movies (Midnight in Paris and Dum Maro Dum), ate my Moslem food and nodded off. When I landed at the Shanghai’s Pudong International Airport, I found it impressive. It was sans frills but was massive in structure. Architecturally, it even looked beautiful from the outside. Only the smoking rooms are much smaller at the airport — each room cannot hold more than 7-8 people smoking simultaneously. And you wouldn’t find Starbucks or Coffee Beans there. I noted that on my way back.

The Arabs and the Chinese

But first, let us check out the immigration queues that reminded me of India and Australia. It took us nearly half an hour to clear immigration. The same process does not take more than ten minutes in Singapore. Singapore-like briskness is unique to Singapore only, I guess. How does Singapore do it? Other countries should learn from the Lion City.

While waiting for clearance, I looked around. A signboard said the airport staff was committed to providing quick service to the passengers, without compromising on their duties. You should be attended to within 25 minutes — that was the written commitment. Nearby there were huge signs saying things like, ‘No Photography’ and ‘Quiet’ (there was no ‘please’ after ‘Quiet’).

At the airport, I was struck by the number of foreigners queuing up at the immigration counters. I saw a surprisingly large number of Arabs and people of Middle Eastern origin waiting to enter the city. Outside the arrival hall, I saw many locals holding placards in Arabic to welcome their guests. Looks like the Arabs and the Chinese are doing brisk business.

Outside, all I could see were rows after rows of cookie-cutter housing complexes and skyscrapers. There was nothing Chinese or even Asian about the view. I could well have been in some European country.

Where are the beggars in Shanghai?

Since I stayed close to an area where the Shanghai Expo is located, which is a little far from the main city centre, I could make sense of a few things only. 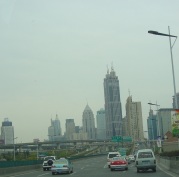 Also, I did not see as many people on the street as I had expected to see. China being the most populous country in the world, you expect a horde everywhere. But it wasn’t like that. That way, Singapore looks more crowded than Shanghai. I could see the public buses, made by Volvo, with reasonable number of passengers on them. This was unlike the public buses in Singapore, which are often overcrowded. I wanted to but I had no time to take the Shanghai metro even once.

Food is comparatively cheaper in China, except for coffee. Taxi is inexpensive. Foreign cigarettes are inexpensive, though it is difficult to find tobacco products (Family Marts don’t sell them, nor do all the supermarkets). A taxi ride to a cigarette shop cost me around S$2 whereas a pack of Marlboro cost me a little over S$1. At the same shop, piles of pirated DVDs of latest Hollywood films were heaped outside the storefront. The storekeeper did not even try to hide his bootleg stuff. What does it tell about China’s anti-piracy efforts?

For moving around with ease, it is better tohave someone with you who can speak Mandarin. Taxi and shop keepers don’t speak English. I was lucky to have someone with me who could speak the language.

Over two days, I could visit only two interesting places during my stay: one was the Bund, the other was an arts village kind of touristy place where you have Italian and French style cafes and many many shops selling clothes, nick-knacks, and art. I think it was Xintiandi, famous for its renovated shikumen lanes. The Bund was glorious at night, illuminated by lights of myriad hues giving the place a colorful and mesmeric, dream-like appearance. There were many people taking a stroll on the Bund. A young Chinese boy (though he was working as a salesman) came up to me and struck a conversation with me. Hailing from Jiangsu, he was with a group of young men. This was his first visit to Shanghai. He wanted me to get photographed with his group members. I obliged.

I remember the boy, his energy, and his outgoing dare. He was learning English and wanted to make a career in sales, hoping to exploit his linguistic skills. “Can you speak Chinese?” he asked me. I nodded no. “One of my English teachers is from Singapore,” he said. Maybe that’s why he wondered if I knew Chinese. After the picture-taking, we went our own ways.

At the airport’s smoking room, on my way back, I was looking for a light. On the wall there was this machine that had lighters embedded in it — the machine looked menacing to me. It looked like a mini-electrocution-er (not sure if this is even a proper word but what the hell!). The sign above the machine did not help either. ‘Please Use Sparingly,’ it said. Sensing my discomfort, a young American chap offered me his lighter. “Thanks,” I said. “How come you could bring in your lighter whereas mine was confiscated by security people?” I asked him. “I don’t know,” he said with a smile. We talked a little more. He was going to his hometown, Chicago. He taught English in China.

Indian and Chinese airports have at least two things in common: lighters are confiscated and queues at the immigration counters are long. I kept smiling to myself thinking about these similarities while I waited for my flight back to Singapore where I knew things would be fast and smooth. 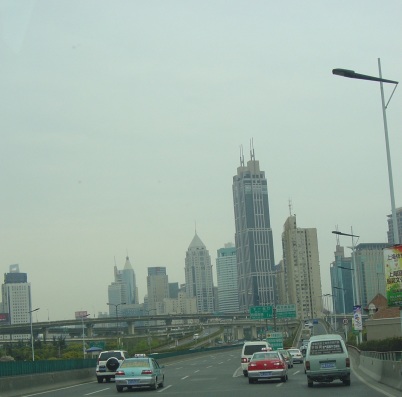