Posted on October 31, 2019 by Mitali Chakravarty Leave a comment 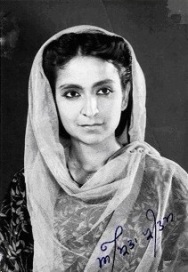 October 31st, 2005, fourteen years ago, Amrita Pritam breathed her last. The writer- poetess, who with her avant-garde outlook, was the first woman  to win the prestigious Sahitya Akademi award in 1966. The  Padma Shri followed in 1969 and then the Padma Vibhushan — the second highest Indian civilian award — in 2004 along with the highest literary recognition given to ‘immortals of literature’, Sahitya Akademi Fellowship. Her unconventional stance towards life and powerful writing, the creator of Pinjar, Ajj Aakhaan Waris Shah Nu ( Today I Invoke Waris Shah), impacted moderns, like versatile poet, Nabina Das. In these lines, Das jubilates the inspiration provided by Pritam…

out for the days

one) that the Urdu

Pick them up, touch

them to your lips

in and out quick

Described as a “ crucible, blue with solitude, holding half-music, half-poetry, and everything in between”, the book had been named one of the best books of poetry the year it was published.

Bio: Nabina Das is a poet and writer based in Hyderabad, India. Her poetry collections are Sanskarnama, Into the Migrant City, and Blue Vessel. Her first novel is Footprints in the Bajra and her short fiction volume is titled The House of Twining Roses. A Sahapedia-UNESCO fellow, a Commonwealth Writers feature correspondent, a Charles Wallace creative writing fellow and a Sangam House fiction fellow, Nabina teaches Creative Writing in classrooms and workshops.