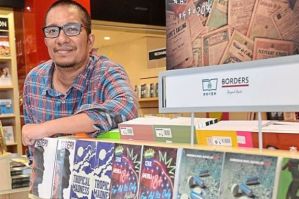 Established in 2011 by writer and independent filmmaker Amir Muhammad, Buku Fixi has become a rare success story in the publishing industry. Its Malay-language urban contemporary novels are a fixture on local bestseller lists. Written in the pulp fiction, noir, horror, crime and thriller genres, many of the novels are brimming with slang and bahasa celupar, making Buku Fixi a distinctive brand of books.

Since its inception, Buku Fixi has branched out into other aspects of publishing, with several other labels under the Fixi umbrella. These include Fixi Retro (which publishes out-of-print Malay books), Fixi Verso (translations of bestsellers), Fixi Novo (English language books) and Fixi Mono (non-fiction).

Amir tells me that he was inspired to create Buku Fixi after attending a local book awards ceremony. According to him, nine out of ten of the Malay fiction nominees had either the words ‘rindu’, ‘kasih’ or ‘cinta’ in their titles.