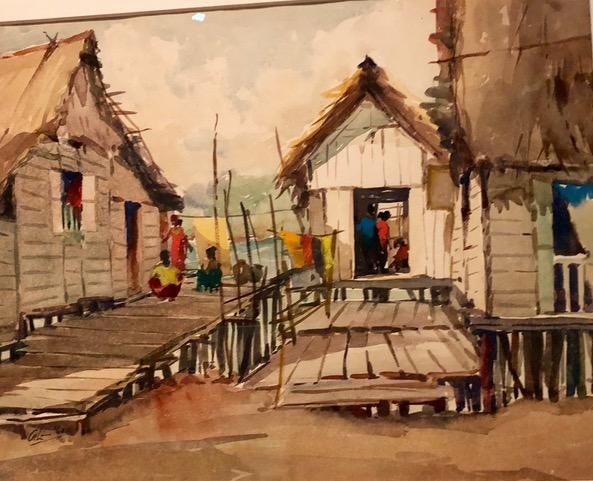 Time present and time past
Are both perhaps present in time future,
And time future contained in time past.

When I walk down the Singapura River and see the statue of Sir Stamford Raffles look down at me from the pedestal near Victoria theatre, I feel I know the man well, not because I have ever met him but because Isa Kamari, the celebrated ASEAN writer, brought him to life in his novel, 1819.

Downtown and around Singapore, one can get glimpses of the history of the island in architecture, sculpture and art. These can be directly related to the stories written by some of the local writers. The multi-faceted Isa Kamari is one such writer who holds me spellbound, taking me on a journey of exploration to the past to help infer the present. Isa – winner of the S.E.A. Write Award (2006), the Cultural Medallion Award, the highest award conferred on writers and artists in Singapore (2007), and the Anugerah Tun Seri Lanang, the highest Malay literary award (2009) – has written all his novels in Malay. Most of them have been translated into English. The translations continue to have the fluidity of his own style, of which we get a glimpse in his first English Novella, Tweet, his maiden venture into writing in English.

His writing is intense and makes one empathise with the past and present as he deftly shuttles between different periods of history, weaving it into the current fabric of the island. You live and emote with the characters – feel sorry for the Malays, the Bugis (seafaring folk from Sulawesi) and animosity towards the British rulers who manipulated the islanders by indulging them in opium and fanning their differences, following the policy of divide and rule, the favourite policy of the Raj to maintain power across its colonies, the effects of which are still evident in countries like India and Pakistan.

Isa takes us on a historic adventure through time in his novel 1819 to a past where Singapore was won by the British in a tussle for power with the Dutch, who had earlier ruled it ‘as a part of Riau’. In those days, it was often referred to as Pulau Ujong or Temasek. The island was nominally ruled by the Sultan of Johor, who was controlled by the Dutch in Indonesia, and the Bugis. At that time the borders of countries were fluid and adapted to the ruler’s needs. Johor and Singapore were part of the kingdom of Riau. It was the British who finally made sure with a treaty in 1824 that the Dutch and the locals would have no say in the administration or trade of Singapore. The British would hold the sole power.

Taking advantage of the local ruling classes’ love for a life of ease, the new rulers introduced opium and encouraged them to indulge. In a daze of opium, the Bugis and the Malay handed over the island to Raffles. Raffles, the ‘official founder’ of Singapore, signed the papers to take over the island from the local Malays. The British created different colonies for different factions of Muslims, like the Bugis, Malays and the Arabs. As the historic character of the first resident of Singapore, Farquhar, gives out in the novel, the British would ‘split and rule’ the kingdom so that they could gain ascendancy over the country and the region.