Have written a book? Here’s how to sell its film rights and make big bucks!

Bhagat was cited by The New York Times as “the biggest selling English language novelist in India’s history” and was also included in the Time magazine’s list of the world’s 100 most influential people. Ahmad’s book made it big not just in its own rights, climbing up to #4 on the The New York Times Bestseller list and winning multiple awards and accolades, the film catapulted his book as one that addressed humanitarian concerns and won the German film award for peace and at least five more international awards. Kwan also made it to the Times list of the hundred most influential people and was named as “five writers to watch” on the ‘Hollywood’s Most Powerful Authors’ in The Hollywood Reporter. Their cinematic launches helped them make it huge!

But did you ever wonder how their books made it to the big screen? How did they sell their film rights? And as an author, what all should you be looking out for when you sell your book’s film rights? 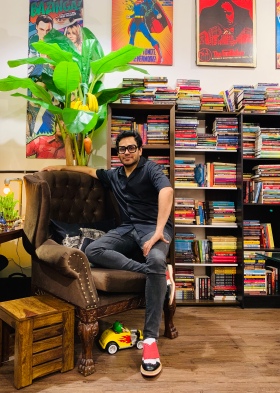 Today, we meet the man who can help authors evade controversies and make it from books to movies… He is the man who has made it a business to help writers sell their books to film-makers. Meet Siddharth Jain, the founder of The Story Ink (TSI), India’s first story company for premium content for screen. It is also “India’s No.1 Book to Screen Adaptation Company” and has sold the adaptation rights of almost 70 books to Producers/Studios in India. It is now expanding its footprint by solving the story problem for Indian regional language content producers and international producers, who are searching for local stories for global audiences.

TSI was founded in April 2018 by Jain who had earlier worked for India’s largest OTT (over the top) — Hotstar.com (now acquired by Disney from Fox), iRock Films, Adlabs Films (Reliance Entertainment), Hyperion Studio — Los Angeles and Baazee.com (Ebay India). In a recent  interview with scroll.in , Jain said that five years from now he sees himself “reading a book a day” and curating great stories for films.  In this exclusive interview, he explains how books are made into films… through options agreements.

Kitaab: What do you mean by an options agreement? END_OF_DOCUMENT_TOKEN_TO_BE_REPLACED