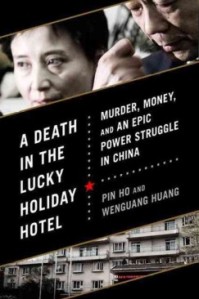 Thomas E. Kellogg reviews A Death in the Lucky Holiday Hotel : Murder, Money, and an Epic Power Struggle in China in LARB

WANG LIJUN, a nationally-known police chief celebrated for his bare-knuckle tactics, is a very vain man. The former police chief and deputy mayor of Chongqing, a Chinese mega-city of more than 32 million, Wang had a staff of 20 whose sole job was to record, for propaganda purposes, “his most moving and breathtaking moments.” He had his speeches compiled in a book, and circulated it to his police force for close study. Though he never went to college, Wang was nonetheless obsessed with academic credentials, collecting honorary degrees and even adjunct teaching posts at universities across China. He seemed to style himself as a modern-day Thomas Jefferson, a wide-ranging intellectual whose interests extended far beyond his professional field to include calligraphy, inventing, and even fashion design.

Wang’s vanity, however, was dwarfed by his boss Bo Xilai’s lust for power. Bo’s just-completed trial for his part in a massive scandal has captured worldwide attention and may be the most important court case China has seen in more than 30 years.