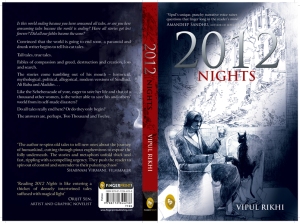 ‘2012 Nights’ picks up on the Arabian Nights motif of storytelling as a way to avert death and disaster, and revisits it for our times. So there are reworked versions of Sindbad, Ali Baba and Aladdin, among a series of other mythological, historical and allegorical tales.

Perhaps I should describe Schahriar and how I found him (or how he found me), in order to explain these nightmares.

Strictly speaking, Schahriar was Karuna’s find. It was a balmy summer evening, as always, when she walked in the front door holding an incredibly fierce-looking tomcat in her arms. He was fully grown, and fat. He bared his fangs often, as if everything in the world rightly excited his mistrust. His eyes were so limpid that they seemed to melt into their very sockets. The dark pupil at the centre of that light, liquid sea of glaze constantly contracted and expanded, like an omen. He lost no love for anybody. He looked like a wild beast trapped in a cat’s body.

There is a funny story behind his name. When I asked Karuna where or how she found him, she refused to reveal it. I have never seen her being as evasive even about her lovers. Jealous to the extreme, this woman, when it came to the cat! For some reason, the name she gave to him, and by which she introduced him to me that balmy summer evening, was Tiger. Tiger, she said, flinging him down to the floor of the living room. Tiger immediately proceeded to tear a sofa cushion apart. Karuna, particular as she was about the house and all the things in it, loved him all the more for it. ‘See,’ she exclaimed, ‘that’s why I call him Tiger. He’s a beast!’

So he was. I would have preferred a Tom, a Dick, or a Harry, if we were to have a cat at all in the house. (Not that he stayed much in the house; but he always returned. At first I thought it was for Karuna, when she came back from work in the evening. But no, he continued to return even after she left.) But we were stuck with the Beast. I began to call him the Beast, instead of Tiger. It drove Karuna nuts after a point. She was used to having things her own way. She couldn’t bear the thought of two different names for one entity. So she decided to change the name of the beast. She wanted my consent for it. She wanted to include me in this decision. A touching gesture. She said we must both call the cat by the same name, so as not to confuse him. It was somehow very important to her.

‘All right,’ I said, knowing how these mutual decisions went. ‘What would you like to call him?’

‘Tiger seems a bit too crude,’ she said. ‘I want you to think of a more sophisticated name. You’re a writer! Think!’

When she said that she wanted me to think of it, I knew that she had already thought of it. She knew it, too – that I knew. We both understood and yet we played this game of mutual consent. (It was good practice for the divorce, I think.)

‘All right,’ I said, as always. ‘What would be a nice, sophisticated name?’

‘Yes,’ she said. ‘It must reflect his personality.’

‘Yes, I think so!’ I said, a little too quickly for the game of pretension.

‘What do you think?’ she snapped, annoyed.

Not knowing what to say, I turned towards Schahriar. He looked at me coldly, offering no support. The latest claw marks that had been delivered by him to me were still inflaming my arm.

Forced into a corner, I tried to come up with something.

‘Yes, exactly!’ Karuna exclaimed. ‘That’s what I was thinking, too. I’m so glad we’re on the same page.’

And thus we successfully accomplished the renaming of Schahriar from Tiger, or the Beast, to… It was a long time before I came to know just what it was. Because for several days after, Karuna uttered not a word either to me or to Schahriar. It was during this time that she was making up her mind to leave me. A divorce on the resume did not look that good. On the other hand, it proved that she was an independent woman, not tied down by family or husband. So the debate went on in her mind; and it was as if Schahriar and I, each evening, could hear the very ticking of her brain as it worked in punch and counterpunch, sparring away. It was surreal to be able to read her thoughts so clearly; and I had the distinct feeling that Schahriar could read them, too. Suddenly we became co-conspirators. Karuna had no idea how transparent she had become. Our looking became so clear, Schahriar’s and mine, that I almost felt like we were connoisseurs of crystal, able to read and appreciate each individual reflection of light.

The name she revealed for the cat just before announcing that she was leaving me and taking him with her – besides saying that I could keep the house and everything that was in it, but that everything else belonged to her (terms that were readily acceptable to me) – was this:

‘Schrödinger,’ she said. ‘Schrödinger’s the name of the cat. I’m glad we agreed at least on this one thing, even if there was so little else we agreed on.’

I agreed with her. And it was while I was agreeing with her, and turning over the new name in my mouth, that it came to me.

Yes, it came to me in a flash!

Of course. That’s who he was. The Sultan of the nights who beheaded a fresh queen each morning, until Scheherazade spun a web around him, telling tales to her sister in his hearing in the last hour before dawn.

How could I not have known him all this time? The audience I was waiting for. The one that would lead me to the very end of the world. At least, the end of my world.

2012 Nights: Schahriar the Cat by Vipul Rikhi is published by Fingerprint, New Delhi.