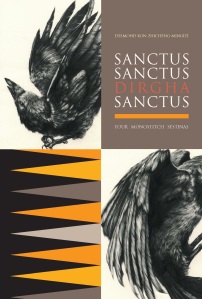 Several things about this book suggest a medieval manuscript – not literally of course, for this is a publication designed for a twenty-first century world – but in the sense of it being precious, valued, holy and unique. The title, which translates as Holy, Holy, For a Long Time Holy emphasises this mood as does the epigraph by Allen Ginsberg. An essential part of the atmosphere is enhanced by the quality of the actual publication itself – fine paper, black and white geometric designs, the luxury of a single line per page, the cover with the rising/falling bird.

Plenty has been written about the constrictions of the Sestina form. The demands of its pattern together with the accompanying anxieties and pitfalls involved in finding six words that repeat and develop the overall piece, are well recorded. By focusing on the single line Desmond Kon has freed the sestina from the grip of its rules. Here the pattern is dispersed – or rather it remains the underlying pulse, the energy behind the language, but no longer obviously so. In this author’s hands it is ‘not bottled’.

Each of the four sestinas addresses a different person or thing. Each has its own motifs, references and moods. Together they offer an impression of paths on a journey, words and symbols which deconstruct, musical notes that digress in improvisation but always return to the theme. 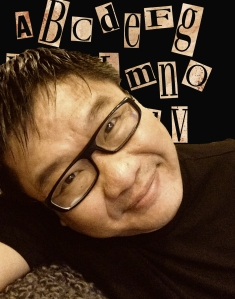 The tone of the first sestina, Horseshoe, is the most ominous. Here we have the ‘retelling of history and its darkness’. References to Hitler, engines and tanks and an ‘ugly manifesto’ reinforce this impression as does the recurring image of the shoe which in turns is a boot, a ‘big shoe in the face of tragedy’ and later becomes a pair of sandals which bind ‘like shackles’. There is a sense of waste and meaninglessness when the shoe comes to resemble a fencer’s foil with ‘its invisible tip aimed at nothing in particular’.

There is a falcon in this poem, or the hint of one, but here there is no rising to heaven. This is a predatory bird diving down in the form of a god abducting Ganymede – an image of falling and descent like ‘ideals glistening in this/miasma of sinking labyrinths but buoyed in a slowly dying dystopia’.

‘Loneliness, I remember you’ begins the sestina ‘The Object of White Noise’ and this sets the tone of a poem where ‘life is but its own long wait’. There are echoes of absence, loss, missing texts and although there is flight it is seen as ‘escape, denouement, hurtling towards the poplar’. Here, stitched into the backcloth, is the figure of Hephaestus, rejected by his mother because of his deformity and tossed out of heaven into Milton’s Aegean Isle which seems to be insignificant ‘like any other mapped dot’.

Later in the poem there is a reference to another Isle – Tennyson’s Happy Isles where Ulysses hopes that it is ‘not too late to seek a newer world’. In this sestina there is a hint there may be ‘hope for soft courage’.

Patmos Blues Along Highway 131 is addressed to a lake. ‘Dear Lake Charlevoix’, begins the single line, there’s an old sedan, its trunk filled with things blue’. This theme of blue is the keynote of the poem which is written in a variation of the sestina form. Blue images and associations wander like musical phrases and songs through the lines. This is a poem rich in atmosphere with its passing references to Al Jarreau, Bob Marley, Cesaria Evora and Collin Raye. The last beautiful line has ‘Dinah Washington taking us home in her twelve-bar blues’.

The final poem Eunoia Eye to Eye is an acrostic where each of the six sestinas spells out the word ‘Eunoia’ – which at first reading I took to be a woman’s name until I read the notes and remembered it is the shortest word in the English language that uses all the vowels. ‘Oiseau’ I found out, is the equivalent French word. The word means ‘beautiful thinking’ and seems to be a medical term relating particularly to mental health – an important element when ‘faith and hope sit by side, over us returning’.

This is a beautiful poem where lists of phrases and images, as in all the sestinas, juxtapose and flow in continuous enjambment. There are layers and layers of riches to be discovered in Sanctus, not only in the inventive deconstruction and re-assembling of the form but in the pleasure of tracking down allusions, the teasing out of motifs and themes, the author’s skill and joy in language and its very roots.

Mandy Pannett works in the UK as a creative writing tutor. She has won prizes and been placed in international competitions and has judged several others. She is the author of The Onion Stone (novella) and of four poetry collections: Bee Purple and Frost Hollow (Oversteps Books), Allotments in the Orbital (Searle Publishing), All the Invisibles (SPM Publications), and Jongleur in the Courtyard (Indigo Dreams Publishing).