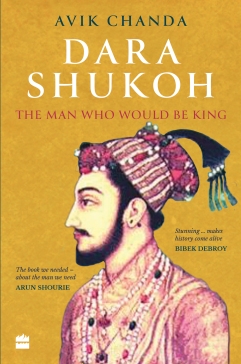 Title: Dara Shukoh: The Man Who Would Be King

In the majlises at his residence, Dara revelled at the prospect of pitching the proponents of different faiths against each other, in a theosophical joust. For a while, Jesuits, with their fervour of preaching and advocating the superiority of their faith, were the fashion of the season in Dara’s mansion. Father Estanilas Malpica, Pedro Juarte, Henri Buzeo and Heinrich Roth shocked and regaled those present, and later, after the debate was over, sat at table with the Prince and shared the wine together. As regards the Prince’s own views in the matter, as Bernier, who came to know him personally, commented: ‘Dara was in private a Gentile with Gentiles, and a Christian with Christians.’ This stemmed not from any innate sense of diplomacy – indeed, Dara had none – but a firm belief in the commonality between religions, an advocacy of the tenets that sustained like an unbroken thread across them, rather than the rituals and doctrines that separated them, causing strife and suffering.

And yet, there were times Dara was not so aloof from the world that none of its news reached him. There was strife and dissent in the empire – and it was directed against him. It was not only the greybeards at court, the statesmen and generals, who felt slighted by him. There was another, equally powerful enemy: the orthodox Islamic clergy. Since ages, there had been an unwritten agreement between the religious and administrative leadership. There was the rule of the Church – and that of noble kings, Brahmin priests and Kshatriya rajahs, and elsewhere across the Muslim empires, ulema and sultans divided the land and their people between themselves. But now, here was Dara, the Crown Prince of Hindustan, who challenged their authority; scorned them for their rigidity, and supposed lack of divine insight and spiritual experiences; and vilified them in his speeches and published writings. Dara had far overstepped his mark as a Prince of the realm, and amongst the disgruntled orthodoxy, there were rumblings of heresy.

As this news reached Dara, he reacted as he had once before, while writing the Hasanat-ul-Arifin (Aphorisms of the Saints) in arguing his own defence in the most articulate manner.

‘I was enamoured of studying books on the ways of men of the Path and had in my mind nothing save the attainment of Unity of God. And since before this time, in a state of ecstasy, I had uttered some words pertaining to sublime knowledge, some sordid and abject fellows, some dry, insipid and bigoted persons, on account of their narrow outlook, accused me of heresy and apostasy. It was then that I realized the importance of compiling the aphorisms of great believers in the Unity of God, and saints who have hitherto acquired the knowledge of Reality. So that these may serve as an argument against those fellows, who were really Dajjals [imposters], although they wore the face of Christ. Abu Jahls – although they assumed the garb of Moses and that of the followers of the Prophet.’

The ostensible reason behind the tract was a continuation of his earlier work, an edited compilation of the sayings of saints down the ages, to make them more accessible to the layman. But through the Hasanat, Dara was really proclaiming his own unorthodox views. It was both ‘argument and proof for the true men of the Path … a check on the vicious tongue of the accusers’. In a collection containing the sayings of the Prophet and the Caliphs, he raised further eyebrows by including the aphorisms of the living Hindu saint, Baba Lal. When asked if he would like to include some of his own sayings, in the light of his close association with many of the key saints of the age, Dara retorted: ‘My aphorisms? My aphorism is that all these sayings are my own – for they are in accordance with the greatest of all aphorisms – the Truth.’

In this new incipient theological war, Dara went on the offensive. His whole life’s learning and training, the fruits of his own mystical experiences and research – all these stood firmly behind him; even the saints were with him. How then could he be vanquished? If the mullahs and ulema could so openly dare to accuse him, he, the Crown Prince, could hit back through his own writing:

Paradise is where no Mulla exists,

Where the noise of his debate is not heard.

May the world become free from the noise of the Mulla,

And none should pay heed to his fatwas.

In the city where a Mulla resides,

No wise man ever stays.

And again: ‘These ulema are ignorant before themselves – and learned, before the ignorant.’

Dara immersed himself in his work. And over a period of time, began to collect his verses, into a divan in its own right: Iksir-i-Azam. But rather than romantic verses or vivid descriptions of nature, what arose through his poetry was a deep, pluralistic notion, which now infused all of his thinking, his actions, his very being.

Turn to none except God

The rosary and the sacred thread

Are but means to an end.

Overwhelmed by his own spiritual quest, it seemed at times Qadiri, the takhallus or nom de plume he used for his verses, had become Qadir – the Lord. Such moments of divine union, trance-like in their ecstasy, could be overpowering, so that even he, the eternal murid, would think of setting distance between him and his self, between his self and God. This objective, dispassionate contemplation of his self – and the whole world mirrored in it – returned him to a momentary sense of poise, while also preparing him for the white-heat intensity of the next experience.

Sit for a while, separate from Him.

Remain for a while Godless.

Out of his musings emerged another tract, outlining the thirty stages of development of the spiritual seeker. Lucid, lambent, slim volume of text gleaming with the lustre of jewel-crust. As Dara poured himself into this work, prose and poetry flowed into each other, and a new, fresh language appeared of its own volition, very different from the staid prose mirroring the learned authority of the researcher. Every passage was lyrical, fresh as flowers, as if language itself had come to the Prince’s aid, moulding his magical, ineluctable experiences into words:

This day, self-consciousness dawned upon me!

I am enchanted. How did it come to pass?

He began outlining the thirty manzils (stages), saying at the outset: ‘The world is a mirage, it will not quench your thirst.’

But the murid’s journey through the various stages of the spiritual path mirrored the parallel journey into unchartered terrain, undertaken by its author. Guided as if by some unknown hand, reverberating, like the beat of the heart, the ebb and flow of the waters of the earth, and that higher rhythm playing in the heavens – which was endless. The sheer insight of it felt electric to Dara. There was no going back. Perhaps not even Akbar, in his infinite worldly wisdom, had seen the matter with such pristine clarity.

Dara recalled a tale he had heard long ago, about how the poet Amir Khusrau came to acquire such sublime eloquence in his poetry. In the midst of a dream, Khusrau met Khizr, the prophetic being representing divine inspiration and rejuvenation through the water of life. In the dream, when Khusrau asked Khizr for a drop of his saliva, so that it could impart ethereal sweetness and eloquence to his pen, and with it, everlasting fame for the poet, Khizr replied that he had already bestowed that same gift upon the legendary poet, Sa’adi, the ﬁrst poet to excel in the Persian ghazal form. Khusrau, awake and crestfallen, went to his Khwaja, Nizamuddin Auliya, and related his dream. Hearing it, the Khwaja dropped into Khusrau’s mouth his own saliva, which turned out to be as potent and miraculous as that of Khizr. Now, it seemed to Dara, as if he was reliving Khusrau’s dream. But in this vision, Khusrau himself, along with Faizi, Urfi Shirazi and a host of other poets, appeared before him and imparted an unction of the divine ab-e-hayat (water of life) to Dara, so that the words that now infused his whole being were theirs – true, immensely potent and eternal. He took up his pen and a verse flowed out from him.

You dwell in the Ka’aba and in Somnath,

And in the enamoured lovers’ hearts;

You’re the rose and the amorous nightingale,

You are the moth on Your own beauty’s taper.

He called the treatise Tariqat-ul-Haqiqat. At length, Dara emerged, like a man awakened from an age-old sleep, like the patient who has recovered from a long illness, and light-footed – explores the world anew. Arising, like Lazarus of old, he emerged from his khwabgah and attended court. Those that gazed at him that day may have been slightly dismayed. His gaze even more otherworldly than usual, was distant, but on this one occasion, entirely peaceful, without a trace of the usual haughtiness that accompanied it. But their dismay quickly turned into consternation, as their glance fell from his jewelled robes, to his jewelled finger, distinguished by the presence of a new signet ring.

On it, inscribed in Devanagri was a single word: Prabhu.

Dara Shukoh – the emperor Shah Jahan’s favourite son, and heir-apparent to the Mughal throne prior to being defeated by Aurangzeb – has sometimes been portrayed as an effete prince, incompetent in military and administrative matters. But his tolerance towards other faiths, and the myths and anecdotes surrounding him, continue to fuel the popular imagination. Even today, over 350 years after his death, the debate rages on: if this ‘good’ Mughal had ascended the throne instead of his pugnacious younger brother, how would that have changed the course of Indian history?

Dara Shukoh: The Man Who Would Be King brings to life the story of this enigmatic Mughal prince. Rich in historical detail and psychological insight, it brilliantly recreates a bygone age, and presents an empathetic and engaging portrait of the crown prince who was, in many ways, clearly ahead of his times.

Avik Chanda holds degrees in economics from Kolkata’s Presidency College and the Delhi School of Economics. With two decades of global Big 4 Consulting experience, he is a business adviser, entrepreneur, trainer and a speaker at the Outstanding Speaker’s Bureau. He has published two poetry collections, Jokhon Bideshe, in Bengali (Protibhash, 2006) and Footnotes (Shearsman, 2008), besides a novel, Anchor (Harper Collins, 2015). His acclaimed business book, From Command To Empathy: Using EQ in the Age of Disruption (Harper Collins, 2017), co-authored with Suman Ghose, was featured in 2018 in Amazon India’s Best Reads, under ‘Business, Strategy and Management’.

Recently, Avik has been nominated for the Forbes India 2020 ‘Great People Managers’ list.