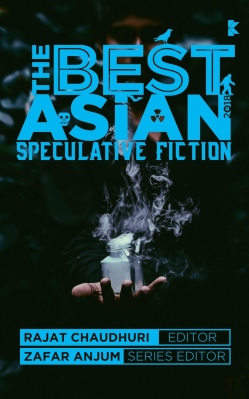 Chhabila died close to day break. She had been choked to death. Her one year old child Etim, following his usual morning practice, is trying quite hard to suck some milk out of one of her breasts.

Patuki has no inkling about who killed Chhabi. Although it is not unknown to him that this is not a natural death, he is yet to discover that the man he spotted approaching Chhabi’s house early in the morning was the killer. But the very next night Patuki would come to know who killed Chhabila. The one who would be his source of information is the most reliable of all. The rich and the poor, thieves and thugs, the good and the bad, all have respect for him. It is only Patuki who he speaks with. But the day is still young and he has to wait long for nightfall. How long will he have to cope with this hubble-bubble in his stomach, with this uncanny sensation running through his veins?

The man who visited Chhabila at dawn had also been seen coming out of her house late in the night. Patuki spends the whole of the night at the southern bank of the pond behind dense bushes, fishing pole in hand. Long aerial roots of a great banyan tree surround this place. These bushes entice him. The night has its own allure. Only Allah knows why people waste these hours sleeping. Patuki does not sleep; he cannot. The long fishing line of Patuki does not have a hook hence the float also is redundant. He has seen people climbing up his fishing thread from the water— many of them. They climb throughout the night and bless Patuki. Then they climb up those roots of the banyan tree. Now they turn into fireflies and fly around the Banyan pir.

The Banyan pir looks after this world. His white beard is clearly visible even in the pitch dark night. The Banyan pir told him so many things last night but not a word about Chhabila’s death. Still Chhabila died. Patuki is sure that if he shares his exchanges with the Banyan pir, with others, then let alone this village no one in this part of the world will pay any heed. He is already known to be insane. But Chhabila’s story has to be shared with someone; it’s rumbling in his stomach. Patuki thought it would be wise to visit Rahim Haji. He is a good man; he gifted him a new lungi on last year’s Id. He walked straight to Rahim Haji’s house.

Rahim Haji is a famous man in this locality. The whole of the mohalla fears him. The Pradhan and the members of the Panchayat hold him in high regard, thanks to his liberal donations to the Party fund. He also spends profusely on jalsas and relief.