South Korean author Han Kang won the Man Booker International Prize on Monday, sharing the 50,000 pounds ($72,000, 63,500 euros) award with her translator — who had only taught herself Korean three years before.

Han Kang, 45, an author and creative writing teacher who is already successful in South Korea, is likely to enjoy a spike in international sales following the win for “The Vegetarian”.

“I’m so honoured” she told AFP. “The work features a protagonist who wants to become a plant, and to leave the human race to save herself from the dark side of human nature. END_OF_DOCUMENT_TOKEN_TO_BE_REPLACED

Ethnic Kachin journalist Esther Htusan, who works for the Associated Press (AP), is also thought to be the first Burmese journalist to earn the accolade.

Htusan received the award in public service along with three other journalists – Margie Mason, Robin McDowell, and Martha Mendoza – for their work in exposing serious labor abuses being practiced in the Southeast Asian fishing industry, which in turn prompted industry-wide reforms and won the freedom of some 2,000 slaves.

Is the Seafood You Eat Caught by Slaves? Meet the Pulitzer Winners Who Broke Open a Global Scandal

Is seafood on the menu tonight? Well, there’s a chance it might have been caught by a slave. That’s what the Associated Press uncovered when reporters traveled to the remote island of Benjina, Indonesia. They found workers trapped in cages, whipped with toxic stingray tails for punishment, and forced to work 22 hours a day for almost no compensation. Democracy Now! spoke to two of the Associated Press reporters who broke this remarkable story, Robin McDowell and Martha Mendoza. Two more journalists, Esther Htusan and Margie Mason, were part of the investigation.

Ethnic Kachin journalist Esther Htusan, who works for the Associated Press (AP), is also thought to be the first Burmese journalist to earn the accolade. Htusan received the award in public service along with three other journalists – Margie Mason, Robin McDowell, and Martha Mendoza – for their work in exposing serious labor abuses being practiced in the Southeast Asian fishing industry, which in turn prompted industry-wide reforms and won the freedom of some 2,000 slaves.

A large group of Penn students and teaching assistants — about 50 people in total — applauded when the author of their latest reading assignment, “The Sympathizer,” stepped to the front of the classroom.

Viet Thanh Nguyen, who just recently won the Pulitzer Prize for Fiction, spoke to students in Penn professor Amy Kaplan’s class “Vietnam War in Literature and Film” on April 18. Kaplan said she was “thrilled, of course” when she learned of his win. END_OF_DOCUMENT_TOKEN_TO_BE_REPLACED

Viet Thanh Nguyen took the Pulitzer Prize in fiction Monday for his debut novel, “The Sympathizer,” published by Grove Press. Nguyen, a professor at the USC, is one of the L.A. Times’ 10 critics at large.

“Thanks for all your good wishes,” Nguyen wrote on Facebook. “I double checked with real people in my publisher’s office…and they say that The Sympathizer really did win the Pulitzer Prize. Unless this is some cosmic virtual reality tr 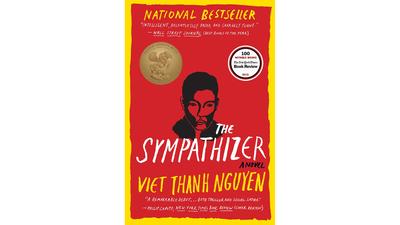 Reached by phone in Boston, where he would be giving a reading later Monday night, Nguyen expressed surprise and delight. He had no plans to break out the champagne until after his reading was concluded.

The Pulitzer committee lauded “The Sympathizer” as “a layered immigrant tale told in the wry, confessional voice of a ‘man of two minds’ — and two countries, Vietnam and the United States.”

Nguyen, who lives in Los Angeles, was born in Vietnam; his family came to the U.S. as refugees in 1975. “The Sympathizer,” which follows a wickedly smart double-agent for South Vietnam, begins at the end of the Vietnam War, moves to Southern California and eventually winds up on a film set not unlike “Apocalypse Now.” Part thriller, part political satire, “The Sympathizer” is sharp-edged fiction.

“The Sympathizer” by Viet Thanh Nguyen, published by Grove Press, won the Pulitzer Prize in fiction.

US$50,000 literary award for original work with a central woman protagonist

Half the World Holdings, an investment platform that supports businesses for whom women are the end-consumer, has announced the launch of the Half the World Global Literati Award.

The annual US$50,000 cash prize will be awarded to a short story, novel or screenplay written in English, judged to have portrayed one or more well-rounded female protagonists as the central character. The award will be decided by a distinguished panel of academics, writers and media professionals who are each committed to advancing women’s voices within their field. The original, unpublished work must offer a fresh perspective on the challenges and joys of women’s lives. The prestigious award also provides opportunities for collaboration within the publishing, film and online media industries. END_OF_DOCUMENT_TOKEN_TO_BE_REPLACED

This year’s category for Asia-Pacific countries is fiction literature. The winner will receive a $40,000 award, and two runners-up per category will receive $5,000 and a trip to New York. Submissions are open until May 3, 2015 and guidelines can be found here.

The Financial Times and OppenheimerFunds have announced the launch of the second annual FT/OppenheimerFunds Emerging Voices Awards, a global initiative designed to recognize artistic talent in emerging-market nations.*

The winners in three categories – art, fiction, and film – will be announced in September 2016. Each winner will receive a $40,000 award, and two runners-up per category will receive $5,000.

“We are delighted to launch the Emerging Voices arts awards with OppenheimerFunds for the second year. The Financial Times has reported and analysed the rise of the emerging market economies and followed their political trajectories for years. These awards show our determination to learn more about, and reward, their cultural richness too,” said Michael Skapinker, FT associate editor and chair of the judges.

Posted on April 9, 2016 by Zafar Anjum Leave a comment

At the Bologna Children’s Book Fair in Italy, Cao Wenxuan, a Chinese children’s fiction writer, bagged the Hans Christian Anderson Prize 2016, according to an article by China Daily. He is the first Chinese writer to be shortlisted and win the highly coveted prize awarded to authors and illustrators of children’s literature.

Posted on April 6, 2016 by Zafar Anjum Leave a comment

Cao Wenxuan has become the first Chinese writer to be awarded what is widely regarded as the “Nobel Prize” in children’s literature, for his “complex” tales about young people facing “tremendous challenges”.

Cao, a professor of literature at Peking University, was named the winner of the Hans Christian Andersen Award at a book fair in Bologna, Italy on Monday.