Posted on December 28, 2015 by Zafar Anjum Leave a comment

Raymond Zhu on the Tagore translation controversy in China 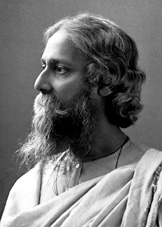 Rarely does one language have the exact equivalent for every word, phrase or concept inanother language.

So even the best translators have to choose what is most important or relevant in the originaland attempt to find the expressions in the target language deemed to overlap the most withthe original. The choices can be subjective.

Rabindranath Tagore is Asia’s foremost literary titan, revered throughout the world and verymuch beloved in China. There are many Chinese versions of his poetry, so it is not surprisingone more would appear.

Stray Birds is a collection of Tagore’s lyrical poems known for their simplicity and sublimebeauty.

The poet published them while he was well into middle age, but they aren’t age-specific. Ifone has to check to determine the age of the person who wrote a body of verse, I’d saythey’re reading a mature poet with no need to follow conventions. The language flows like amountain stream, with no hint of artificial tinkering or mannerisms.