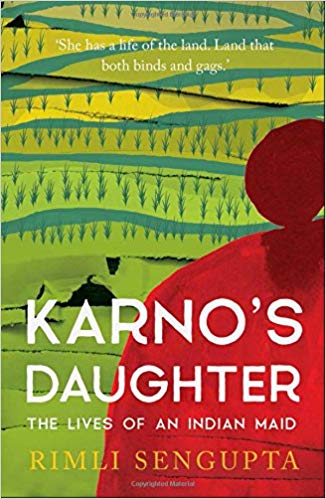 Remember Baby Haldar’s gritty dark memoir of a domestic servant in Delhi, A Life Less Ordinary? If Baby narrated her dark journey from Kashmir to Murshidabad to Durgapur to Delhi, here is ‘Buttermilk’ in Kolkata making a daily commute on the 5.40 a.m. local from Subhashgram to ‘the city’. She goes round on foot then to Tollygunge and to Ballygunge to do kitchen, laundry and cleaning services at half a dozen homes. Why is she called Buttermilk? You get to know when it’s just six more pages to wrap up the book.

Buttermilk hails from a village in Sunderbans, from a farming family. She has a non-maid life back home where Karno Haldar, (yes, another Haldar by pure coincidence) her father, Bashona, her mother, and Buttermilk’s six siblings and her paternal grandparents lived. The village of her marital home, a joint family where agrarian duties are divided, comes later. Karno migrated to the city to pay off a loss of 150 kilos of rice; that’s how the family came to live at Ponchanontola, a Kolkata slum – all because of a crab, a huge crab, that Buttermilk had caught and brought home. This is the story that opens Rimli Sengupta’s debut book, Karno’s Daughter.

The opening chapter, suitably titled “Crab”, gives an impression of an opening in fiction. However, Karno’s Daughter is anything but fiction. It’s one of the best in narrative non-fiction that has been published in recent days in India. The story deals with the rough life of a people who have always lived in correlation to the earth, cultivating their own food.  In a world where hardly one percent of the urban population has an idea of what constitutes our agrarian crisis, Rimli Sengupta chooses an interesting vehicle to impart information on how small-holding rice farmers in rural Bengal subsist.

END_OF_DOCUMENT_TOKEN_TO_BE_REPLACED
‘The Guest’, a Kindle novella by Suneetha Balakrishnan, is on offer for free download for 3 days from 21 December.
The Guest is a day in the life of three people of an Indian family and the dynamics of Indian family life is not quite what we watch on TV, Balakrishnan told Kitaab. “The Guest can be downloaded into your Kindle or the free app Kindle on PC on amazon,  and its a free download for three days from 21st December 2014 (Pacific Time),” she said.
END_OF_DOCUMENT_TOKEN_TO_BE_REPLACED