Got an E-book to Publish? You Can Win Prizes upto US$13000; Award for 500 Word Story Flashes to Limelight

Posted on July 19, 2019 by Mitali Chakravarty Leave a comment

‘Small is beautiful’ was a term popularised by EF Schumacher in his  book of the same  name.

But how small is beautiful?

Now we have a writing contest offering an award for a story that has a maximum of 500 words.

Do you have one for the picking?

The last date for entry is 31 st July, 2019. END_OF_DOCUMENT_TOKEN_TO_BE_REPLACED

Posted on June 24, 2019 by Mitali Chakravarty Leave a comment

Despite studies projecting that millennials may prefer reading paper books over e books, China Literature, a pioneer online literature company, is tying up with Singtel to bring literature to readers online.

China Literature, a unit of Tencent Holdings and China’s largest e-book and online publishing website, boasts 9.6 million e-books from 6.4 million authors and they plan to grow bigger with the merger.

“We are the biggest owner of intellectual property (IP) in China, but that’s not the end of the story,” said vice-president Luo Li of China Literature. China Literature earns its income by charging readers for their services. Last year it generated an annual profit of 30.36 million yuan. However, Mr Luo Li stated that online readers would be charged lesser once the income from the IP business rose. END_OF_DOCUMENT_TOKEN_TO_BE_REPLACED

Posted on June 19, 2019 by Mitali Chakravarty Leave a comment 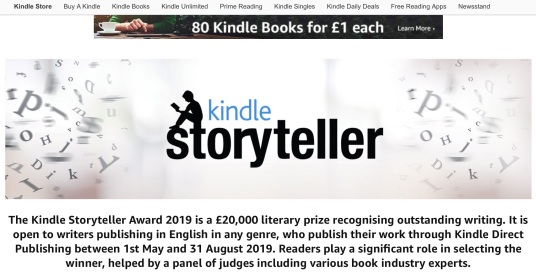 A £20,000 award has been announced for a storytelling contest hosted by Amazon for a yarn that is judged on the basis of popular demand. END_OF_DOCUMENT_TOKEN_TO_BE_REPLACED

Posted on August 31, 2018 by Sucharita Dutta-Asane Leave a comment

(From The New Statesman. Link to the complete article given below)

The popularity and ubiquity of online fan fiction (fan-written fiction created based on existing narratives) cannot be overstated. While often relegated to a niche in internet culture, assigned the same nerdy status as Tumblr teens and Reddit bros, “fanfic” is due the credit for a growing number of pieces of mainstream culture (Fifty Shades of Gray was originally Twilight fan fiction). But while fanfic has thrived, the internet has remained an unobvious place for the majority of society to go to read fiction. Opting for Kindles, literary magazines, or hard copy books, mainstream culture tends to use digital platforms for consuming news stories, culture reports, and opinion, and leaves its literary consumption to more traditional channels.

However, that could all be changing. The New York Public Library announced last week the launch of their series called “Insta Novels”: a “revolutionary new program that will bring digital novels to Instagram”. Classic novels, poetry, and short stories will be shared via their Instagram Stories feed, making literature accessible on a platform that millions of people visit daily. The first in the series is Alice’s Adventures in Wonderland; told through a series of animated videos and pictures spliced between images of each and every page of the book. It will be followed by the Kafka’s The Metamorphosis and the short story The Yellow Wallpaper.

Under-translated and overly vulnerable to censorship, the publishing communities of Southeast Asia nevertheless will soon be ‘making waves,’ according to one of Singapore’s industry leaders.

PP: And how about other markets in the region?

KQ: Our neighbors’ industries are quite varied.

Both Indonesia and the Philippines have very robust publishing industries, and have produced some international bestsellers.

Malaysia, Vietnam, and Thailand are at around the same level as Singapore, while for Cambodia, Laos, Brunei, and Myanmar, the industry is still in a nascent stage.

There seems to be growing interest and development in Myanmar now that it has returned to a more or less civilian government and opened up a bit more.

The fortunes of the individual countries’ publishing industries are directly related to their development and economic growth. In general, the prospects for the publishing industries across the countries of ASEAN look positive as the region’s economies develop and the numbers of the educated middle classes continue to grow and boost demand.

PP: Can you describe the challenges facing the publishing industry in the ASEAN world?

KQ: I think the two biggest challenges that face the region’s publishing industry stem from language and politics.

With the exception of Singapore and the Philippines, most of the publishing in the region is not in English, and is therefore overlooked by the West. Once in a while, an Eka Kurniawan is “discovered” and makes it big in the West . But the chances of a writer in this part of the world getting a US or UK publishing deal when they’re not writing in English are extremely low.

I can see a microcosm of this even in Singapore, where we have writers writing in our four official languages: English, Chinese, Malay, and Tamil. And although we award the Singapore Literature Prize to incredible works of fiction, poetry, and creative non-fiction in these four languages, it’s the English works that most excite the majority of Singaporean readers.

To Yuwei Pan, a regular fix of Chinese novels on her smartphone makes her daily commute a pleasure. But these aren’t just normal stories. Chinese e-books are often serialised; readers wait for the latest chapters of a story, much like viewers catch up with the newest episodes of Game of Thrones.

They also provide an interactive reading experience, where readers and writers can discuss and co-develop the plot. “I turn to Kindle for serious books, but I go to Chinese online literature for imagination, fun and freedom,” Pan says. END_OF_DOCUMENT_TOKEN_TO_BE_REPLACED

Sequoia Capital China, and Perfect World co-led a new round of financing in Zongheng, a Chinese literature site that provides vertical and horizontal literature contents.

Founded in 2008, Zongheng is a domestic Chinese original literary professional website. It serves as a cultural platform meant to guide the master writers and epic works.

New Apps Provide a World of Literature, One Chapter at a Time

This year marks the 10th anniversary of the iPhone, Apple’s all-purpose gadget that kicked off the smartphone boom and forever changed the way we communicate, collect and consume information. With portability and a knack for relieving boredom, the iPhone and its ilk naturally became ad hoc e-book readers for busy people seeking brief escape to fictional places from nonfiction reality, like being trapped in transit or stuck in a Trader Joe’s line stretching to infinity and beyond.

Serious readers know squinting through a sprawling novel can take some effort on the small screen. But just as websites, videos and games soon adapted themselves for the smartphone experience, a new type of “mobile fiction” has emerged to fit the confines of the device — and today’s on-demand attitude.

Modern mobile fiction typically consists of sections of a novel or story that take just 15 to 20 minutes to absorb. The installments are cleanly formatted for easy reading on a four- or five-inch screen, and delivered at regular intervals by email or app (Android and iOS). Cliffhangers are popular. Read more

China to guide the development of online literature

The General Office of the Communist Party of China (CPC) Central Committee has asked the China Writers Association (CWA) to guide online literature and carry out other reforms.

According to a plan to deepen reform of the CWA issued by the office on Thursday, CWA should establish evaluation and incentive systems that will benefit the development of online literature.

The Party’s role in literature work should also be strengthened. For instance, the Party should guide and support works focusing on juveniles and patriotism, as well as realistic and historical topics.

In the meantime, the CWA should organize literature exchange programs among Chinese mainland, Hong Kong, Macao and Taiwan, and provide more communication opportunities between Chinese and foreign writers. Read more

Amazon China, one of the largest online booksellers, released its 2017 Reading Report on April 20, which shows a continued interest in reading and some new trends among Chinese readers.

Based on 14,000 surveys and company data, Amazon reports that 56 percent of those surveyed read more than 10 books last year, continuing a trend found in previous years.

But this year it finds that 78 percent of the readers are sharing reading experiences on social media, such as on instant-messaging app WeChat, micro blog Sina Weibo, review website Douban and question-and-answer website Zhihu.