Book Review: A Bombay in My Beat by Mrinalini Harchandrai

Posted on August 1, 2018 by Sucharita Dutta-Asane Leave a comment 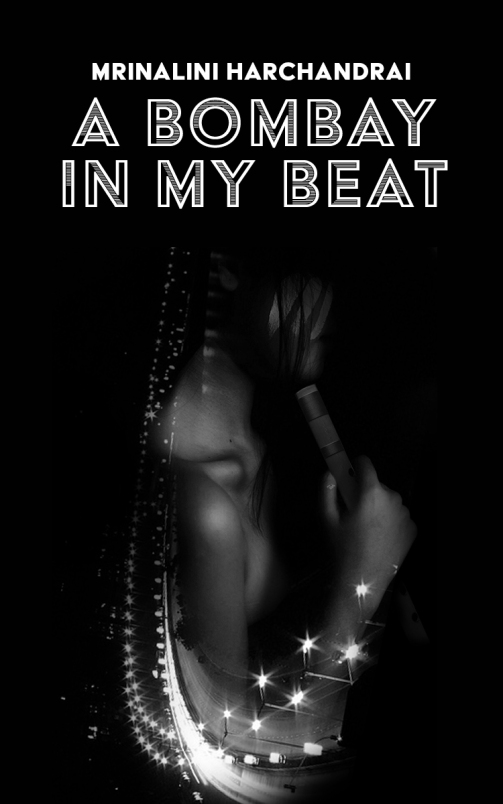 As I place a finger on my pulse, I realise that it cannot be isolated from the throb and rhythm of Bombay – Mrinalini Harchandrai

If we talk about a place that bounces up like a sweet cadence or a place conceived in scintillating music; if we talk about a sonorous treat to the ears, sounds dancing to life, leaping up in each page or a musicality that conjures up a place – Bombay. If we talk about a traveller’s languishing trails, the detour and the fleeting destinations, the hazy sights from the windows of trains, the slanting glasses in skyscrapers and beads of rain drops trickling by or a song sung in monsoon that is both sharp and intimate, delectable and whimsical, contemplative and jocular, then Mrinalini Harchandrai’s collection of poems is a feast for your senses. You cannot help wondering why the poet resorted to ‘Bombay’, a term that is obsolete now instead of the recent ‘Mumbai’. You cannot help but wonder whether it is an act that tells us a little more on ‘looking back’ or taking a ‘backward glance’ – are we ushered into a world of retracted footsteps, bittersweet memories of the poet or a past that is resuscitated in the present? Above all, it is a Bombay in her beat; the word ‘beat’ remarkable in its duality – Harchandrai points to a rhythmic presence, a city that thrives in each throb of her heart and also a city that is steeped in music. The word transports us to a world of experimentation by the Beat generation poets, especially Ginsberg and Snyder, best known for defying the norms of conventional literature, pivotal in seeking an elevated consciousness (through meditation, Eastern religion and hallucinogenic drugs) and are chiefly credited for battling against myriad manifestations of social conformity. The ‘inflected locution’ of the Beat generation poets is a serious inclination in Harchandrai’s collection, not to mention the heavy leanings on the jazz poetry of Langston Hughes. This not only stretches the exploratory potential of Harchandrai, but also creates a spectrum of emotional variance and experiential realities. If the poet wants to do what Hughes aspires to accomplish – ‘I tried to write poems like the songs they sang on Seventh Street,’ then it is indeed necessary to mention that she sets forth a gargantuan challenge for herself, something as real as translating the blues emanating from a nightclub in Harlem and Washington D.C into a suite of poems mimicking the raw splendour of life and also its sheer hopelessness, something as fragile as replicating the improvisatory nature of jazz – a stance that requires a whole amount of self conscious  regulatory principles. As we delve deep into A Bombay in My Beat, we detect Jazz poetry as one of the vital sources of inspiration. In Mrinalini Harchandrai’s words, ‘with a hat-tip to Langston Hughes,’ the poems seek refuge in ‘individual music’, a fact that is well detected even in the treatment of diverse worldviews and perspectives.

This is a collection that fuses words with sounds, a peculiar phenomenon that renders the poems musical – you do not read but sing them. Mrinalini Harchandrai’s A Bombay in My Beat plays the soundtrack of a overpopulated, busy city for you and how sublime the effect is – strangely enough, she wades through Bombay, a city of her dreams, a city that she carries in her head, a city that is made alive by jabs of pain, heartbreaks, bouts of laughter and loss, a city that is at once accommodating and distant. Bombay, as the title etches out, cannot be severed from the poet’s creative enterprise. The collection is rooted in this place.

A Bombay in My Beat captures the sounds and frequencies of an urban landscape – there are evocative sounds, say, a tap, a flap, a thud, the patter of monsoon rains on dingy windowpanes, the hustle and bustle of city life, the screech of a honk, footfalls, an old song that conjures up a hoard of memories, and many more. We come across bangarwalls shouting at the top of their voices visiting one house after the other with an eye for used and broken things that they want to buy. We are ushered into the slums of the fisher folk in Colaba and Cuffe Parade areas of South Mumbai. The sight of the bhelpuriwalla makes your mouth water, his thali of puffed rice, aloo, onion and tamarind chutney a tempting treat. You head to Marine Drive and take a turn and move towards Kala Ghoda. You wander a bit in Nargol, the coastal sea villages between Maharashtra and Gujrat. You enter the nooks and corners of Bombay, hawk-eyed, with a cartographer’s anxiety, maps in hand, marking the places, exploring the terrain.

Most of the poems carry at their hearts a song. They create a patchwork of melodies, each song deeply connected to the poet’s life in more than one way. We have references to “Sing, Sing, Sing” by Benny Goodman, “Man in the Mirror” by Michael Jackson, Roxette’s “The Look,” “Material Girl” by Madonna, “The Locomotive Breath” by Ian Anderson, George Michael’s “Kissing a Fool,” Louis Armstrong’s “A Kiss to Build a Dream On,” “Imagine” by John Lennon and Yoko Ono, “Buffalo Soldier” by Bob Marley, “Parsley, Sage, Rosemary and Thyme” by Simon & Garfunkel, to name a few. This constant shifting from a song to a verse and a verse to a song, this smooth transition, the perfect blending of diverse ingredients – they give many angles to A Bombay in My Beat. In fact, the songs reflect her inner and outer worlds, the colourful topography, the vistas that unfold in front of our eyes. There are meeting points too, certain nodes of connection between planes, the imaginary and the real. Sometimes, Bombay grows out of your head. Sometimes it stays put.

In “Ummm…”, Mrinalini Harchandrai captures the slippery world of meaning-making and the polysemic intensity of words. She talks about the inextricable bind between words and sounds in particular and the physical vivacity of the former which is a bit awry to digest, though metaphorically rich: ‘Words,/ I tried to scoop them,/ slippery friends,/ they jiggled/ and tickled/ and wriggled/ and slithered/ through holes’ (98). For Harchandrai, the very words turn ‘silly’ and ‘fancy’ in “Me Say Day-O Please”. She drowns us in a world of excesses and surpluses. We are lost in a pool of alternatives and the choice is ours. The words play tricks on us, so does the trickster poet: ‘But my words/ they don’t leave me in peace,/ no break in their urgency/ no sign of release’ (102).

On the other hand, myriad notes are invoked in “Before the Monsoon”, a poem that is replete with phrases like, ‘Ray fingertips played piano/ on the water,’ ‘a thunder of wing flutter,’ ‘the arousing thumri/of the koel’s onomatopoeia,’ and ‘explosions of vermillion/ powdered the tops/ of gulmohur trees.’ Here you not only watch the rain dancing on you as a deluge, washing away the pavements, pouring down on the canopied trees, but you also hear the melodies that the rain plays for you. The ingenious rain, with alacrity, sings songs that are unheard of, songs that topple you over with familiarity. There is a subtle personification at work – we get to see a translucent being making music with fingertips, hands and feet.

However, in “Flight of the Bansuri” we are transported to a world of teasing and temptation, delicious flirting, coaxing and cajoling. The Bansuriwalla lures you; the poem is silky, feather-light and caresses you with an otherworldly touch: ‘Your voice glides around me/ seductive coils/ in a lazy stretch (87). Your tone trips/ and quivers/ slinging us closer/ like feathers/ in a night jasmine grip (87). Don’t pull away yet,/ Rapt, unwrapped/ In your butterfly breath’ (87-88).  If the “Flight of the Bansuri” is laced with a mythological flavour, “Wordy Naka” is packed with real punch; you find yourself in an ordinary road of a busy city racing ahead of ‘scooterists, cabbies, chauffeurs, bus drivers, truck and tempo wheeler dealers,’ who grimace and make a face at a ‘lady driver’, an incident that very deftly exposes the prevalent gender biases in our Indian society.

No doubt we have a hearty, robust serving on a platter; the book does not pause even for a second, it plays on. The only obligation is perhaps the context to each poem without which you cannot infer any meaning, without which you are a bit lost, unanchored, a man without any direction. There is music, too much music. Loud music. Soft music. If you do not have an ear to it, this is not your book. You find yourself humming a melody, whistling away to glory, spinning your foot on the floor with hands positioned up, ready to dance, gyrating to your blues. You sing, you dance. This is what A Bombay in My Beat does to you!