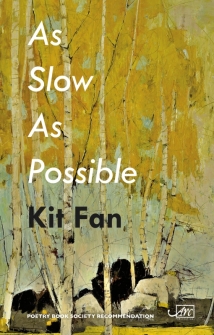 Title: As Slow As Possible

stripped bare to lines and sparrows.

July is never the month for learning.

A school on Clear Water Bay Road, yet no water

bay, nor road. A bridge, along the scar of a hill

through the Lotus-flowered Magnolias I used to cross over

to the clamour of books.

A month of no children, but the translucent playground

after rain recalls the aftermath of hide-and-seek:

the run for life.  A boy under a tree

restless for the world to spin in ten seconds.

That summer day, among school teachers

we stood and sang.

Not of psalms and gospels but farewells and falling men:

How the wind knew of sadness, the soil

In the assembly hall children who knew little of death

had seen images of guns and wounds, a speck

of a person stopping a column of tanks.

It was a clear day but we were all shut in.

The ground deserted to the democracy

The cicadas buzzing their way

to the dead of summer.  The world waiting

in a dark assembly hall on Clear Water Bay Road.

Kit Fan’s As Slow As Possible is a book of changes, of unlikely bridges between far-flung places and times, a collection of shape-shifting, trans-migrant poems that travel across geographies and time zones. There are poems about the slow life of trees which establish links across time and space, about environmental catastrophe, art in war zones, artworks that travel across time, all of them reflecting on mortality and survival. Divided into three parts, the book weaves back and forwards between East and West, past and present, art and memory, pivoting around a central sequence called ‘Genesis’, an uncanny re-telling of Chinese creation myths in the language of the Authorised Version. The first part of the book is a brilliantly chromatic travelogue, while the collection ends with a more grounded sequence, ‘Twelve Months’, focusing on a kind of diurnal poetic house-keeping, based on the poet’s migrant life in Yorkshire.

Born in Hong Kong, Kit Fan moved to the UK at the age of 21 where he completed a doctoral thesis on Thom Gunn at the University of York. His first book of poems Paper Scissors Stone won the inaugural HKU International Poetry Prize in 2011, and his translation of Classical Chinese poetry won one of the Times Stephen Spender Prizes in 2006. In 2017 he was shortlisted for the Guardian 4th Estate BAME Short Story Prize for ‘Duty Free’ and the TLS Mick Imlah Poetry Prize, while in 2018 he won a Northern Writers’ Award for Diamond Hill, a novel-in-progress portraying a deprived community in the last shanty town in Hong Kong. His second collection, As Slow As Possible, was a Poetry Book Society Recommendation for Autumn 2018 and was listed on The Guardian‘s 50 biggest books in Autumn 201 and the Irish Times’ Best Poetry Books of 2018. He is a regular reviewer for The Poetry Review(UK).