In the wake of the ongoing Covid-19 pandemic in India, mainstream Indian journalists like Rahul Kanwal of TV Today (owned by India Today), Arnab Goswami (founder of Republic TV) and Sudhir Chaudhary (TV anchor and editor, Zee News) have come under fire for promoting hate against a particular community for spreading the Covid-19 virus. Of late, the targets of their programmes have been the Nizamuddin Markaz of the Tableeghi Jamaat in New Delhi and Madrasas.

According to Suchitra Vijayan, a lawyer and founder of The Polis Project, who says that hate is a big business, this kind of journalism could fall under the category of Genocide journalism, as it establishes a “… pattern of presenting and commenting on the news” that “transforms political debate into righteous passion against individuals and groups that disagree with the status quo.”

The modus operandi of this sort of journalism is as follows: “The targets of violence are marked with precision, taken as public hostages and accused of being enemies of the state. Later they explain what has to be done to this enemy. Through constant repetition, they construct a political, moral and historical alibi that eventually becomes the accepted truth. In this steady journey into the abyss of intolerance, journalists and news anchors become agents of the state and even annihilators of society. All the ingredients for conditioning a democratic alibi that existed in Nazi Germany and Rwanda exist in India today.”

Read the full text of the essay here.

‘The rise of AI would result in a huge split in the world,’ says historian Yuval Noah Harari

Posted on December 17, 2018 by Sucharita Dutta-Asane Leave a comment

(From The Hindu. Link to the complete article given below)

In the light of his theories about the human future, when Yuval Noah Harari was asked what must politicians be questioned for before elections, he said, “Ask them what will they do to lessen the danger of nuclear war, climate change, regulate AI and bioengineering, and their vision humanity in for 2050,” he said. “And if they don’t answer but keep talking about the past, then don’t vote for them.”

Taking off from his latest book, 21 Lessons for the 21st Century (2018), which hit the shelves in August this year, Mr. Harari delivered the Penguin Annual Lecture 2018 in Mumbai on Sunday, titled ‘The New Challenges of the 21st Century’, during which he addressed topics of nationalism, ethical training, climate change, and the need for more philosophers.

To say that Harari’s last three books have been a global success would be an understatement. The author of 2014 bestseller Sapiens: A Brief History of Humankind (translated in 45 languages and sold more than a million copies worldwide), Homo Deus: A Brief History of Tomorrow (2016), and 21 Lessons for the 21st Century (2018), has been endorsed by Barack Obama, Bill Gates and Mark Zuckerberg and referred to as the “guru of the liberal elites” by the media. In a roundtable interaction with the press before delivering the lecture, the Israeli historian declared that he neither has political skills nor are his books about the immediate politics of any country. “I can’t give particular political advice to any government or how to implement policies,” he said. “But what I try to do is influence the macro agenda of various nations and humanity as a whole.”

One can’t talk about Mr. Harari’s work without contextualising it in today’s socio-political reality — be it his arguments about race, genocide, war, sexuality or artificial intelligence.

Posted on April 2, 2018 by Sucharita Dutta-Asane Leave a comment

Between the news coverage, reportage and statistics around the ongoing Syrian civil war and the battle against Islamic State the firsthand experiences of ordinary civilians on the frontlines are difficult to source and expose. Yet these are often the very stories that can often provide crucial wartime evidence, chronicle social and historic shifts, or unearth true narratives that can counter official ones. And these stories are increasingly found on our bookshelves rather than on the newsstands.

From testimonies to short stories, graphic novels to memoirs, female writers, journalists and survivors are currently fronting the literatures of war, conflict and exile. The past two years have seen a surge of books and memoirs authored by women that capture the far-reaching human consequences of the Syrian civil war. Amid the fatigued reportage on its increasingly more complex escalations – and the cynical moves of other nations vested in opposing outcomes – these are compelling testaments to what befalls ordinary people as a consequence of fanaticism and powerful interests.

A remarkable example is Farida Khalaf’s 2016 memoir The Girl Who Beat ISIS. Khalaf and her family are Yazidis, members of a Kurdish-speaking minority who follow an ancient, pre-Islamic faith. The book recounts how Islamic State crossed the border into their mountainside village in northern Iraq, killing the men, recruiting the boys, and taking women and girls to slave markets in Raqqa.

Through testimonies of those such as Khalaf, the genocide against the Yazidis was officially recognised by the UN. Khalaf, in collaboration with German journalist Andrea C. Hoffmann, shaped their series of detailed interviews into a first-person narrative. Despite the indiscriminate violence visited on whole communities and towns, her memoir reminds that what women have suffered at the hands of IS, and what they continue to endure in refugee camps, is further devastating still.

Book Review: The Book of Calamities by Peter Trachtenberg 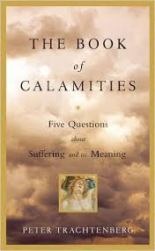 The book is a compelling first hand account of not just the author’s own suffering due to substance abuse, the death of his friends and his parents but also a first hand account of other people’s pain as he travels to places of strife such as Rwanda and Sri Lanka, follows up with families who lost loved ones on September 11, and interviews those in grief, seeking an answer to his questions.

The beauty of the book lies in the author’s ardent and almost unflinching seeking. He intersperses his travels and experiences with philosophies and religious texts from the Bible and Buddhism mainly but those chapters and paragraphs are like supporting documents, almost theoretical in their references. It is his travels and walks through the trenches of human suffering that pulls the reader in. How many people do we know who have travelled to Rwanda after the genocide or Sri Lanka after the tsunami? How many brave the hostility of these climates to ask questions? Trachtenberg recounts his experiences in such places and interviews people such as the Daley twins who suffered from Epidermolysis Bullosa, a form of affliction that made living in your own skin literally almost possible. The author befriends the people he seeks out in his journey to find a meaning and makes his research into suffering an empathetic and intimate look into lives we read about and normally keep at a distance. By describing his own sufferings, Trachtenberg draws us further into his story and his own search for meaning — “. . . suicide suddenly appealed to me as something I could do . . . I used about fifty Fiorinal and a razor blade that I was too squeamish to do very much with.” ( p. 57)