Posted on October 23, 2018 by Sucharita Dutta-Asane Leave a comment

In the movie Tiranga, the popcorn thriller which had managed to polarise its critics and eventually gain cult status based solely on television reruns and pirated DVDs, Raj Kumar tells his enemies, ‘Just like my bullets, my tongue also talks straight with my enemies,’ thus setting a precedence for years of patriotic thrillers to come, complete with the same template of over the top villains and an honest-to-a-fault patriotic protagonist. While Bollywood has faithfully followed this template for the next decade or so, Indian literature has forayed into the world of such thrillers only recently but has quickly followed up in the footsteps of the visual medium to deliver stylish and taut, if entirely implausible stories of armies and soldiers engaged in battle with almost melodramatic but invisible enemies.

S. Hussain Zaidi manages to steer his story clear of the comedic element of thrillers in his latest book, Eleventh Hour. His writing reflects his experience as a veteran journalist; it is trimmed down to perfection and maintains a pace that makes the book unputdownable. Usually the problem with any thriller is that either the plot gives away too much at an early stage, thus making the rest of the book clichéd, or it starts too slow and results in the reader losing patience. This book is delightfully balanced. The author drives the narrative at his own comfortable speed, giving us an insight into both the tragedies of the past and the obvious danger looming over the present. He also makes use of his knowledge of the places that he has chosen for his story, describing each location with precise details, whether it’s the streets and slums of Bombay or the luxurious confines of a hijacked cruise ship. At various points throughout the book, the reader has to pause and take in the accuracy of the plot, starting from the internal workings of various bureaucratic, anti-terrorism agencies to the murmuring world of Bombay’s underworld. The panic and paranoia of a post 26/11 city still reeling from the feelings of being held hostage by the unknown forces of terrorism are depicted in their visceral entirety and become the driving force behind the main narrative.

END_OF_DOCUMENT_TOKEN_TO_BE_REPLACED

Book Review: The Circle of Life and Other Stories by Haimanti Dutta Ray

Posted on July 27, 2018 by Sucharita Dutta-Asane Leave a comment

Considering it is her debut book, the author writes The Circle of Life and Other Stories with a wild abandon and an almost childlike glee, which becomes both the boon and a bane for this collection. What you first notice in these stories are their characters; most of the characters are well fleshed-out, relatable and carry the general essence of being a Bengali in their subtle habits and mannerisms. The author uses her understanding of the Bengali culture to its fullest while drawing out her characters, giving them voices which are at times unique, at times a reverberation of how the community functions.

‘The Final Curtain’ talks about the famed theatre circuit of Kolkata and one man’s journey through life and later, death on the stage. Another story, ‘Mimesis’, features a man and woman who love each other but never really learn how to understand and navigate through the subtleties of their relationship, leading to a tragic, if not unpredictable, conclusion. The characters in both stories, although entirely different from each other in behaviour, hold the same pattern of being souls who live in the present but have their roots stuck somewhere firmly in the past, quite like the city in which these stories are set. Not only are the characters relatable but also the struggles they go through. Whether it’s the marital problems that the characters in ‘Mimesis’ try to deal with or the themes of mortality and loss in ‘The Final Curtain’, the grief and guilt that the characters struggle with remind readers of their own lives. In doing so, the stories become less of fiction and more of a slice from our everyday existence, fragile to a fault and fraught with problems, but with hope and empathy as their saving grace at the end of each day. Her description of the pousmela, the Bengali fair celebrating spring, or the artworks of Rabindranath and Abanindranath Tagore, evoke a sense of deep nostalgia in every Bengali reader, at the same time bringing to the non-Bengali reader a taste of the culture.

However, the characters are only part of the larger stories, which unfortunately suffer repeatedly from other factors. These are largely bad pacing and the conclusions that neither befit the beginnings nor do justice to the erratic assembly of characters. ‘Wait Until Dark’, for example, starts off as a whodunit but eventually devolves to something that can hardly be taken seriously by the end. The endings of most stories are disappointing, building the narrative to a point where it can’t carry through its own momentum. The characters have similar voices, a problem that becomes all the more evident because the stories showcase a wide variety of people from various facets of life, and who are therefore, expected to speak differently.

END_OF_DOCUMENT_TOKEN_TO_BE_REPLACED

Book Review: The Wounds of the Dead by Vikram Paralkar

Posted on May 31, 2018 by Sucharita Dutta-Asane Leave a comment

The Wounds of the Dead is a book which takes risks with almost every element of its narration, and to a large part, makes it work in a way most of us wouldn’t expect. The biggest challenge it faces is the blending together of various genres, and it deftly manages to cross over from one to the other without breaking the flow of the story. Going from one chapter to the next, the narrative becomes a high-tension, tightly bound medical drama at some points and at others, a more relaxed treatise on spirituality. Although it becomes evident which are the high points of the book and which aren’t, the writer does a good job of keeping the margin relatively smaller.

I’ll admit to my initial scepticism when I began with the book. The story at first sounds deceptively simple: a doctor is forced by his circumstances to treat a family that shouldn’t be alive, but is. Probably the most interesting character in the book is that of the doctor, a typical veteran of medicine and melancholy, who tries his best to deal with his past as well as his frustration over being stuck in a land where he doesn’t belong. In doing so, he becomes the most relatable character in the entire mix, one who is dedicated to his trade but hates his job, and doesn’t shy away from unleashing the pent up frustration in his words for the simple minded villager. However, when trouble comes knocking, quite literally, he rises to the occasion, letting his kindness and compassion shine through his otherwise prevalent bitterness. In doing so, the doctor becomes a metaphor for humanity and of how trying times always bring out the best in us. In comparison, the rest of the characters are considerably less complicated and driven by straightforward motivations.

END_OF_DOCUMENT_TOKEN_TO_BE_REPLACED

Posted on January 23, 2018 by Sucharita Dutta-Asane Leave a comment 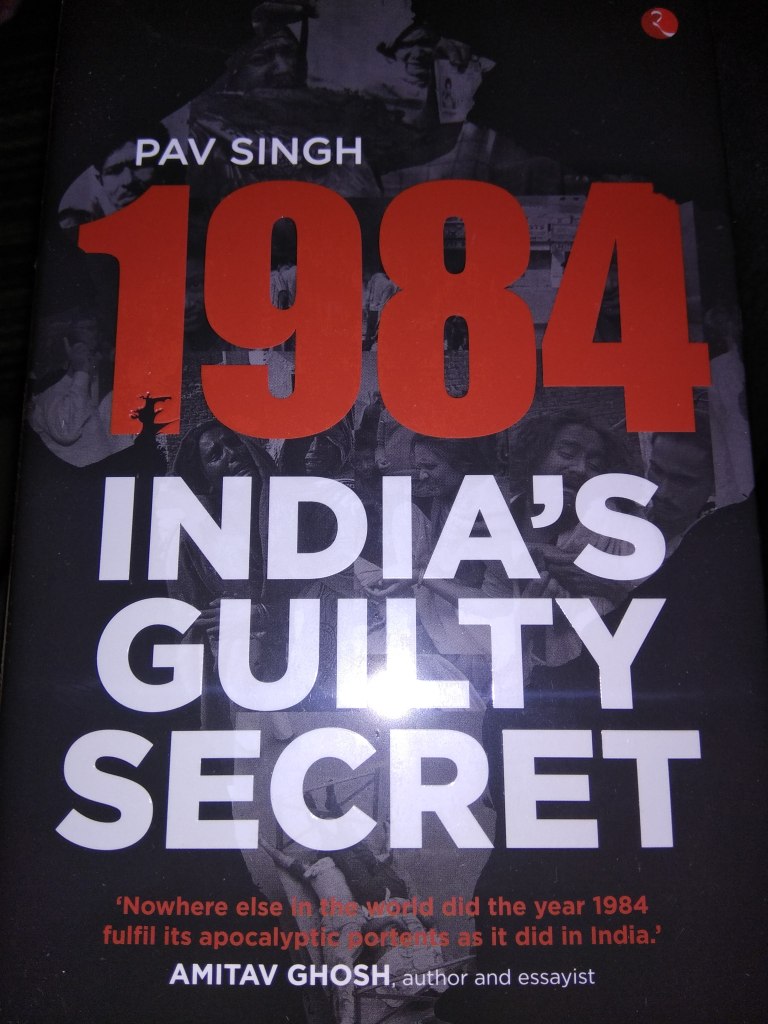 1984: India’s Guilty Secret does something most books in its genre can’t – it keeps its promise. It’s a scathing and almost brutal journalistic read rich with data and mention of instances that have become a permanent fixture in the memories of one of the largest communities of our country, unfortunately. While most books in the genre of journalism either manage to alienate their readers by the use of jargon or disappoint by eventually turning out to be shallow fluff pieces lacking anything of relevance, this book by Pav Singh fulfils on both counts. It manages to pull in the reader by the sheer honesty that leaps out of every page, and keeps them firmly invested by a streamlined account of facts and discussions which affirm the need to learn more about our history in order to understand the present scenario in our country.

In the foreword, the author apologises for and justifies the use of gory and violent details, and it is an apology made for a reason – this book contains distinct and often detailed descriptions of the atrocities committed against the Sikh community in the wake of the infamous 1984 riots. However, the real horror of the incidents discussed in this book, does not come from the details but rather from the calm way in which the author chooses to talk about them. Pav Singh plays both roles to perfection here, as a narrator who isn’t divorced from the trials and tribulations of the Sikh community as a whole, at the same time, as a journalist, focussing more on facts to support his arguments, relying on the readers’ understanding of the truth and not just their sympathy. At recurring intervals the author reminds us that it’d be a grave error on our part to call the chaos that unfolded in those four days, a riot. Riot is spontaneous, he reminds us, but what happened in 1984 was something that had been planned well in advance, against a community which had no idea what violence awaits it and was thus unable to either fight back or even defend itself; massive propaganda and media blackouts were used by the forces in power to make sure there was no escape from the death and destruction that’d follow, making it in essence, something much closer to the genocide initiated by Hitler during WW II. Indeed, stories from the Nazi camps and inhuman circumstances that had plagued Germany are used at many instances, as a method of drawing parallels between these two occurrences separated by time and space but brought together by intent and its fallout.

END_OF_DOCUMENT_TOKEN_TO_BE_REPLACED

Nilesh Mondal is currently pursuing an undergraduate degree in Power Engineering. When he’s not overwhelmed by the intricacies of engineering, he lets himself sink in a quagmire of unfinished stories and unwritten poetry.

You can look him up on Facebook, or follow him on Instagram @hungover.hamlet, where he makes a fool of himself often, or check out his blog at loveinthetimeofdiarrhoea.wordpress.com