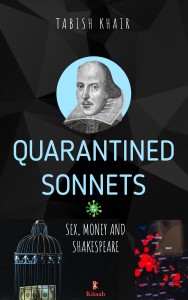 In this ebook, in powerfully original rewritings that combine humour and satire with acute social and political commentary, Tabish Khair uses William Shakespeare’s sonnets to paint a memorable and moving picture of the world in corona quarantine. This is arguably the first major work of literature to come out of the corona crisis. With iconoclastic humour and intelligence, it runs the readers through a gamut of emotions. It is also a clarion call for change. These 21 sonnets range from initial humorous riffs on the foibles of our age but grow progressively darker and more acerbic, while always playing with Shakespeare’s original works. A must-read for our times!

Profits from this e-book are being donated by the publisher and author to Migrant Workers Centre, Singapore, helping migrant workers to cope with the current economic crisis complicated by the Novel Coronavirus pandemic.

Tabish Khair is a poet, novelist and critic who was born in Ranchi (Jharkhand) in 1966, and received his school and college education in his hometown, Gaya, in Bihar, India. In the 1990s, he worked in Delhi as a staff reporter for The Times of India, before moving to Denmark, where he is now employed as an associate professor and lives in a village outside Aarhus. His recent novels include How to Fight Islamist Terror from the Missionary Position (HarperCollins, Interlink and Corsair 2014), Just Another Jihadi Jane (Penguin/Periscope 2016; Interlink 2017) and Night of Happiness (Picador, 2018). His last collection of poems, Man of Glass, was published by HarperCollins in 2010. Translated into various languages, Khair has won or been shortlisted for more than 20 major poetry, fiction and non-fiction prizes in six countries.

Kitaab posed five quick questions to Tabish Khair about Quarantined Sonnets: Sex, Money and Shakespeare, which has just been published an e-book on Kindle.

Kitaab: What made you write this sequence?

Tabish Khair (TK): Towards the end of my second week of the Novel Coronavirus lockdown in Denmark, a friend asked me to look again at Shakespeare’s sonnets for an academic anthology that she was planning. As I re-read the sonnets, I also started re-writing some of them at an idiosyncratic tangent to the original. I stopped with 21 in all, which I thought was the right number, given the usual coronavirus quarantine recommendations.

Kitaab: Had you intended to publish them?

TK: No. It started as a labor of love (and distraction), but it could not remain impervious to what was happening around me. Largely on the urging of three friends whose opinions I respect, I succumbed to the temptation of adding to the parallel, but hopefully less deadly, pandemic of Covid literature. And I thought I could raise a bit of money for some of the afflicted by publishing it as an e-book.

Kitaab: You sometimes take great liberties with the original sonnet, and sometimes, especially in the first half, you also use them to comment cheekily on aspects of Shakespeare’s personality, like his sexuality. Don’t you think Shakespeare scholars will be mad at you?

TK: I hope not. The sequence has been read by some Shakespeare scholars, who have loved it. I must say that I am a great admirer of Shakespeare. One has to use an impossible to define word like ‘genius’ when talking of people like Shakespeare, Ghalib, H. C. Andersen, Emily Brönte, etc., people who created far beyond their circumstances. I believe that while talent deserves respect, genius demands irreverence.

Kitaab: Your sonnets contain many voices. But mostly Shakespeare’s sonnets are seen as expressing his voice. Why that difference?

TK: Actually, I – and some others – do not see Shakespeare’s sonnets as expressing one monolingual voice. I think he adopts personas in them too, plays with our expectations. I exaggerate that aspect even more. So that my personas do not just include a poet wooing his lover or a wo/man with different sexual inclinations, they also include others effected by the virus crisis: like nurses, prostitutes, ordinary people, migrant workers, and even financial speculators and politicians profiting from it. As is the case with Shakespeare’s sonnets, they also get darker and more acerbic. I signal this turn by using one of his sonnets as a hinge.

Kitaab: Why the choice of personal humour combined with political satire?

TK: I think the times call for it. They call for a combination of both. The Novel Coronavirus is a highly personal threat and a very political thing at the same time. We will have to take a stand at both levels. The sequence is an attempt to make readers take this stand in their lives.

You can support this effort by ordering your copy here.