Posted on July 12, 2018 by Sucharita Dutta-Asane Leave a comment

Indian Instincts by Miniya Chatterji was launched at the Google headquarters, Singapore on June 29, 2018. The launch included a panel discussion with authors Eunice Olsen, Miniya Chatterji and Zafar Anjum, journalist, filmmaker and chief editor, Kitaab, Singapore. Indian Instincts is a collection of 15 essays that offer an argument for what the book describes as ‘greater equality and opportunity in contemporary India’.  The essays cover issues of paramount importance to India and its residents, from what could be the possible beginning of human advent in India to love, sex, culture, money, values, current ideas around nationalism, democracy – in short, it seeks to address all things Indian in the current scenario.

The book is readable and accessible to everyone while simultaneously retaining its intellectual rigour and philosophical depth. Here is contemporary India and its myriad hues from a writer who explores the institutions we have created and their stranglehold on our lives, or what we have allowed them to become. 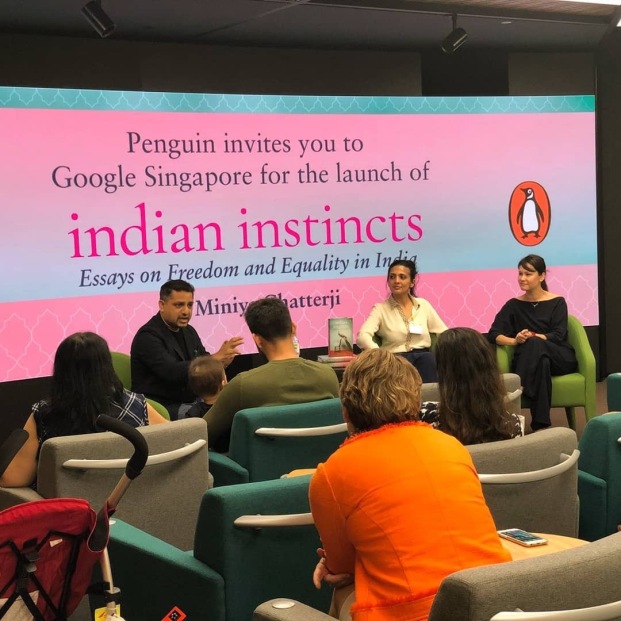 The panel discussion covered many burning topics including social impact of economic development, nationalism, gender equality and violence against women, education and its role in developing rational thinking among the masses. Olsen emphasised that there is need of more awareness on gender equality in Asia. Chatterji advocated women in India should not be seen or judged through parameters of males. She said that an education system that encourages critical thinking, rationality and debate is the key to many of the problems plaguing India.